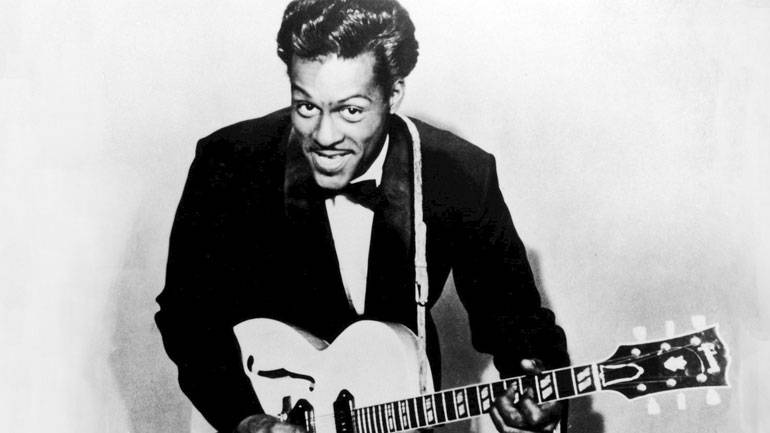 BMI mourns the loss of legendary rock ‘n’ roll pioneer Chuck Berry, who passed away on March 18 at the age of 90. An innovative guitarist, a masterful songwriter and the consummate showman, Chuck Berry almost single-handedly forged the template for countless songwriters to emulate. He affiliated with BMI in 1955, and his classic songs like “Sweet Little Sixteen,” “Roll Over Beethoven,” “No Particular Place to Go,” “Nadine (Is It You?), “Rock and Roll Music,” “You Never Can Tell,” “Maybellene,” “Memphis,” and, of course, “Johnny B. Goode” – among many others – remain timeless additions to the canon of American popular music, and sound as vibrant today as they did upon their release over a half-century ago.

An early acolyte of bluesmen like T-Bone Walker and Muddy Waters, Berry merged elements of rhythm & blues and Western swing into an energetic new style fresh with attitude. His songwriting came packed with richly detailed narratives imbued with Berry’s own witty wordplay. But on the back of a string of memorable singles came Berry’s incendiary guitar-playing and over-the-top stage presence, casting the St. Louis, Missouri native son as the original guitar hero.

A multiple GRAMMY-award winner (including one for Lifetime Achievement in 1985), a Kennedy Center Honoree, a Songwriters Hall of Fame inductee, a Polar Music Prize laureate, one of the first inductees into the Rock ‘n’ Roll Hall of Fame and one of the first songwriters, alongside Bo Diddley and Little Richard, to be named a BMI Icon in 2002, Berry’s status as part of rock n’ roll’s firmament is cemented, but even late into his life, he continued to tour and perform. On his 90th birthday, Berry disclosed that he was working on his first new solo album since 1979’s Rock It.

BMI is deeply saddened by the loss of this great icon, and is very proud of our association with Berry’s incredible music legacy.