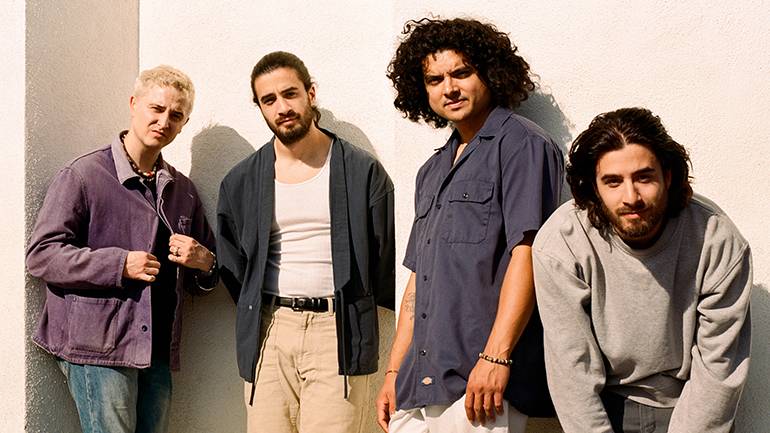 Cool fact: The band Clubhouse was born in, well, an actual clubhouse. The white-walled spot in the Columbus, Ohio suburbs was built by singer Max Reichert and twin brothers Ari and Zak Blumer (guitar and drums, respectively). The three neighborhood friends bonded over their shared love of music and began performing in their area. Bassist Michael Berthold and keyboardist Forrest Taylor, joined later, and Clubhouse saw success as they sold out shows and released independent music that garnered millions of streams. After college, the group reconvened to pursue their musical dreams, but they were soon struck with harrowing news: A bone cancer diagnosis for Reichert, who after multiple surgeries and chemotherapy treatments is now thankfully in remission. As Reichert explains, the band’s vision crystalized after his diagnosis, and it was “make the most of the life you were given, because you only have one life to live.” Songs like “Flipside” touch on themes like his own health struggles as well as concerns about society’s collective mental health. “I think we can all relate to ‘Flipside,’ especially with COVID, just knowing when to take time for yourself when things get too stressful,” Reichert told The Columbus Monthly. The members currently live in Los Angeles, where they are working on their second EP, and their growing fan base can’t get enough of their sing-along choruses, boppy guitars and smooth synth sounds. They’ve shared the stage with notable groups like The Wombats, HAIM, and Young The Giant, and they’re currently on tour supporting Juice and Almost Monday, with stops in California, New York, Pennsylvania, and Ohio.