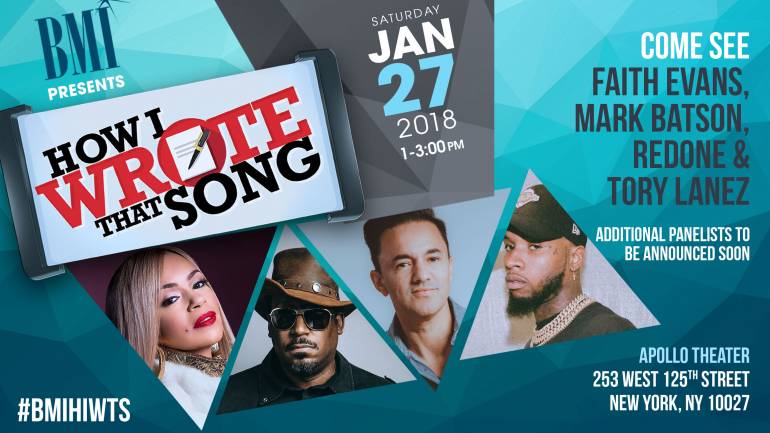 BMI will host its annual pre-GRAMMY panel How I Wrote That Song® (HIWTS) on Saturday, January 27 at the Apollo Theater (253 West 125th Street). Moderated by BMI VP of Creative, Catherine Brewton, the event, held in partnership with the Apollo Theater, will highlight the art of songwriting and the creative process that goes into making a hit song. Attendees will hear the inspiration behind some of their favorite songs by industry heavyweights such as GRAMMY-award-winning super producer RedOne, GRAMMY Award winning multi-platinum producer Mark Batson, GRAMMY-nominated R&B sensation Tory Lanez and R&B royalty Faith Evans.

The event will run from 1-3PM with doors at 12PM. Tickets are $20 in advance, $25 at the door (plus fees). A special college student rate is available at the Apollo Theater box office only with valid college ID, 18+ (plus fees). For more information and to purchase tickets, please visit http://www.ticketmaster.com/event/0000542CC587665A

To join the conversation, use #BMIHIWTS.

REDONE: The multiple GRAMMY-winning producer, musician and songwriter has become one of the most successful and sought-after record producers and songwriters in the world. His work has earned more than 70 international hit singles, including 35 #1 singles, and he continues to watch his work garner more chart-topping accolades with Nicki Minaj, Lady Gaga, Jennifer Lopez, Usher, Quincy Jones, Enrique Iglesias, Nicole Scherzinger, Mary J Blige, Cheb Khaled, Maylene Farmer, One Direction, Midnight Red, Chawki and many more. @RedOne_Official

FAITH EVANS: is a multi-platinum GRAMMY- Award-winning recording artist, songwriter, arranger and record producer. With a music career spanning over two decades, Faith has released eight studio albums, with over 18 million albums sold and spawning over 30 singles. With three platinum-certified albums under her belt, the seven-time GRAMMY nominee was awarded a GRAMMY for “Best Rap Performance by a Duo or Group” in 1998 for “I’ll Be Missing You,” a tribute to her late husband and hip-hop legend Notorious B.I.G. Faith is keeping his musical legacy alive with her latest release The King & I, a duets collection featuring the vocals of B.I.G. and hers. The multi-talented singer is also a New York Times best-selling author (Keep the Faith: A Memoir) and a TV producer, co-creating the original reality series, R&B Divas, which became TVOne’s most watched original premiere in the history of the network. @faithevans

TORY LANEZ: Tory Lanez is a vocalist and producer from Toronto. His debut album I Told You reached #4 on the Billboard 200 upon its release with the highest first week sales of a debut urban artist in 2016. The album spawned two #1 hits, the Platinum-certified “Say It” and “LUV,” which was nominated for “Best R&B Song” at the 59th Grammy Awards. The release garnered critical acclaim from the likes of Rolling Stone, who praised Lanez’s “crooning vocals and hard-nosed raps” and Pitchfork, who called it “an intoxicating brew of atmosphere-warping R&B and pop zip.” Having graced the stages of Lollapalooza, Bonnaroo, Hangout, Made in America, The Meadows and a recently released collaboration with Cashmere Cat & Major Lazer “Miss You,” Lanez is, as Complex says, “only getting started.” @torylanez

MARK BATSON: Mark Batson is a GRAMMY Award winning multi-platinum producer, musician and songwriter. He’s produced albums by artists including Eminem, Alicia Keys, LeAnn Rimes and Anthony Hamilton and has worked with everyone from Jay Z, Dave Matthews Band, Beyoncé, Maroon 5 and Dr. Dre to James Blunt, Skylar Grey, Grace Potter and The Nocturnals, Seal, Nas and Sting, among others. Batson won a GRAMMY Award in 2004 for “Best R&B Album” for his work on Beyoncé’s Dangerously in Love, and two consecutive GRAMMY Awards for “Best Rap Album” for Eminem’s Relapse (2010) and Recovery (2011). He has produced and composed music for the feature films I Tonya, D.U.D.E, Incorruptible, Beauty Shop, Miami Vice, American Hustle and Triple 9. @Markbatsonmusic