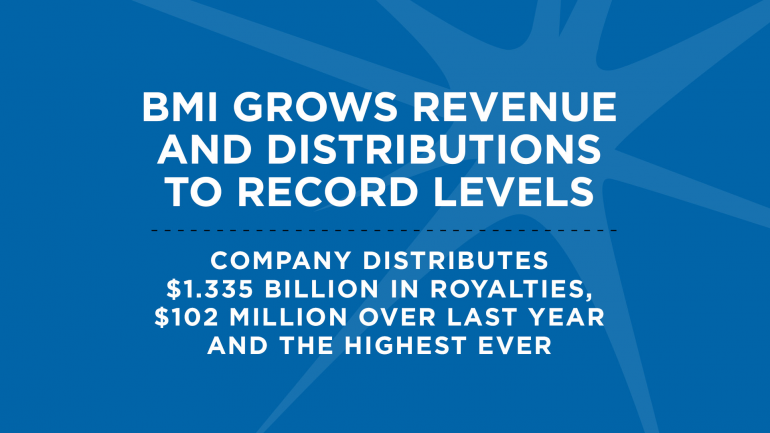 BMI has grown its revenue and distributions to record-setting levels, closing out a full fiscal year marked by ongoing challenges around the Covid-19 pandemic.  The company announced it has distributed and administered a record $1.335 billion to its songwriters, composers and publishers, its highest distribution ever, up $102 million or 8% over last year.  In addition, BMI’s total domestic licensing revenue exceeded $1 billion for the first time, driven by phenomenal growth in the digital sector.  The company also continued to set revenue records, bringing in $1.409 billion, a 7% increase over last year.  Due to new ASC 606 accounting guidance, adopted by BMI in FY ‘21 and explained further below, BMI will report that revenue total as $1.361 billion.

“In a year marked by incredible challenges, the power of music is stronger than ever,” said Mike O’Neill, President & CEO, BMI. “BMI was once again able to demonstrate record growth, both in revenue and with the largest royalty distributions in our history. I am very proud of the team at BMI who, throughout the year, continued to focus on our top priority of mitigating the financial impact of the pandemic on our creative community. We are very pleased to not only provide this stability to our songwriters, composers and publishers, but also to grow the value of the BMI repertoire now and into the future.”

The ASC 606 accounting guidance modified BMI’s revenue recognition policies.  As a result, any revenue earned by BMI in a previous fiscal year, but that was collected and distributed in the current fiscal year, does not factor into the final reported revenue total. This new accounting guidance primarily affected digital and international revenues and had no impact on the $1.335 billion that BMI distributed and administered to its affiliates this year.  The FY ’21 numbers below reflect the new ASC 606 accounting guidance, unless noted, while prior period amounts continue to reflect historically reported revenue totals.

BMI’s total distributions of $1.335 billion include domestic and international royalties as well as distributions from direct deals that BMI administers for its publisher and digital service provider clients.  Those direct deals, which make up approximately 6% of BMI’s overall distribution, totaled $85 million, marking a $14 million increase over the previous year.

BMI’s record performance in total domestic revenue, comprised of the digital, media and general licensing categories, was driven by a 47% increase in digital licensing revenue, which closed the year at $448 million.  BMI will report this number as $423 million per the ASC 606 accounting guidance.  Digital audiovisual services contributed greatly to the increase, thanks to new agreements with several FAST (free ad supported TV) services, strong growth from subscription video-on-demand services including Disney+, Hulu and Netflix, and the proliferation of direct-to-streaming film premieres on services such as Apple, Amazon, YouTube and Fandango NOW, among others. The company also forged new licensing agreements including Fortnite, and renewed agreements with Spotify and Pandora, among others.

BMI’s growth in digital helped offset declines in the media licensing and general licensing categories due to the pandemic. Total domestic media licensing revenue, comprised of cable and satellite, broadcast radio and television, posted an 11% decline from last year to $469 million.  BMI will report this number as $472 million per the ASC 606 accounting guidance. Of this, cable and satellite derived revenues remained the largest contributor, coming in essentially flat to last year at $269 million. Radio posted a $50 million decline year-to-year, due to a combination of the ongoing impact of the pandemic on advertising and the one-time retroactive payment included in last year’s radio total that resulted from BMI’s rate court settlement with the industry. Broadcast television came in at $95 million, down 6% from last year.

The general licensing sector, consisting of businesses like live concert venues, bars, restaurants, fitness centers, along with other income, was down 2% year-to-year for a total of $127 million. The category, which saw a 23% decline last year, is starting to rebuild as businesses continue to reopen across the country.

Powered by the global strength of BMI’s repertoire, international revenue grew to $365 million this year, a $15 million or 4% increase over last year. However, due to ASC 606 accounting guidance, that number is reported as $339 million.

The company processed 1.98 trillion performances, up 13% from last year.  Of that total, 1.95 trillion were digital plays, highlighting the continued growth of the digital streaming and audiovisual sectors. BMI also saw its number of licensed musical works increase by 10% this year, with BMI’s new total now at 18.7 million.