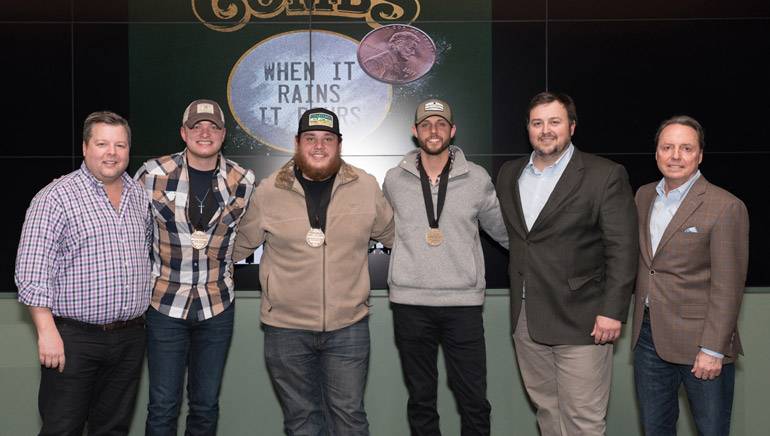 Music Row assembled in the BMI lobby Wednesday afternoon to celebrate rising star Luke Comb’s second Platinum, multi-week No. 1, “When It Rains It Pours.” The heartache-inspired track was written by BMI songwriters Luke Combs, Ray Fulcher and Jordan Walker. Comb’s second consecutive No. 1 from his Gold-certified debut album This One’s For You, ”When It Rains It Pours” marks the first No. 1 for co-writers Fulcher and Walker.

Each of the writers can be found out on the road this spring. Combs will kick off the 2018 leg of his headlining tour, Don’t Tempt Me With A Good Time, with two sold-out nights at the legendary Ryman Auditorium. His third single off the album, “One Number Away,” impacted radio earlier this month and continues to climb the charts. Fulcher, who penned 8 of the 12 tracks on Comb’s debut record, joins Morgan Wallen on the road, while as one-half of rising country duo Walker McGuire, Jordan Walker is out promoting their self-titled debut EP on the Lost Tour, which features a mixture of headlining shows and support dates for Lee Brice, Granger Smith and Drew Baldridge.