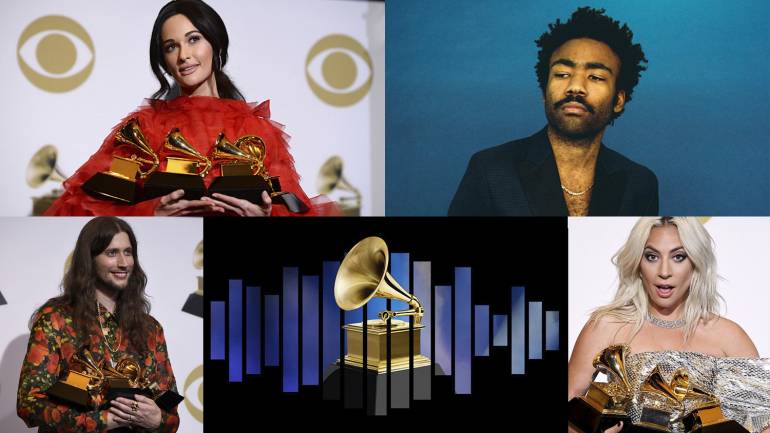 Music’s biggest night returned to Los Angeles’ Staple Center, last night, for the 61st Annual GRAMMY Awards, and true to form, a robust showing of BMI affiliates went home with the gold.  Childish Gambino’s incendiary single “This is America” made history by being the first rap song to win both the Song of the Year and Record of the Year. The song also earned GRAMMYs for Best Music Video and Best Rap/Sung Performance. Kacey Musgraves also took home four awards, claiming Best Country Solo Performance for “Butterflies,” Best Country Song for “Space Cowboy” and both Best Country Album and Album of the Year for Golden Hour. Lady Gaga made multiple trips to the stage as well to collect the awards for Best Pop Solo Performance for “Joanne (Where Do You Think You’re Goin’?)” and both Best Pop Duo/Group Performance and Best Song Written for Visual Media for “Shallow.” Composer Ludwig Göransson graced the stage not only for his contribution as producer of Childish Gambino’s “This is America” earning Song of the Year, but also to collect the Best Score Soundtrack for Visual Media award for Black Panther.

In addition to the well-deserved accolades, the evening was punctuated by several unforgettable performances. Among the highlights, Camila Cabello, Ricky Martin, Young Thug and J Balvin kicked off proceedings with an explosive performance of “Havana,” augmented by legendary trumpeter Arturo Sandoval. Lady Gaga brought the house down with an emphatic performance of “Shallow,” flanked by Mark Ronson on guitar. Shawn Mendes delivered a stirring performance of “In My Blood” as a duet with Miley Cyrus. Cyrus also joined in for an all-star tribute to Dolly Parton with Kacey Musgraves, Maren Morris, Little Big Town and Parton herself reprising favorites like “Here You Come Again,” “Jolene,” “Red Shoes” and more. Dan + Shay dazzled with a rendition of “Tequila” that found Shay sustaining a single note that got the room on its feet. Kacey Musgraves delivered and soulfully elegant rendition of “Rainbow,” and after medley of “Stay” and “Rockstar,” Post Malone teamed up with the Red Hot Chili Peppers for a performance of their song “Dark Necessities.” Jennifer Lopez performed a homage to Motown Records, Travis Scott brought a rambunctious crowd of hip-hop fans onstage for a vigorous airing of “Can’t Say” and the legendary Diana Ross rang in her 75th birthday with a rapturous performance of “The Best Years of My Life” and “Reach Out and Touch (Somebody’s Hand).”

Congratulations to all the BMI winners! Below is the complete list.

* Not affiliated with BMI.