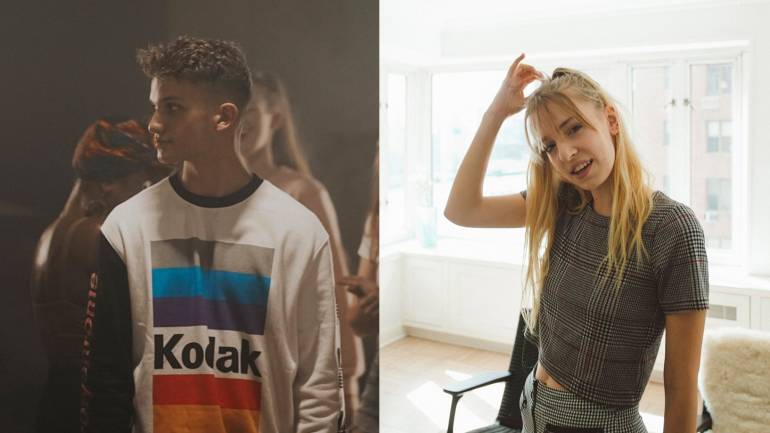 Once again, BMI songwriters were recognized in competition for the 2019 Abe Olman Scholarships, with two aspiring students with significant promise honored for their already accomplished efforts. Presented by BMI and the Songwriters Hall of Fame, and made possible each year by the Olman family to nurture burgeoning songwriters in honor of the career of Abe Olman, a lifelong songwriter and titan of the music publishing community, this year’s scholarships were awarded to BMI songwriters Maude Latour and Ori Dulitzki.

Despite stints living in Sweden, London and Hong Kong, Maude Latour counts herself as a New Yorker. When a fondness for storytelling and poetry composition blossomed into a penchant for lyrics and melody, Latour ended up cutting her musical teeth in various New York live music venues like the Bitter End, which launched the careers of many prominent songwriters, from Pete Seeger to Lady Gaga, and all points in between. A high school finals project involving two original songs of Latour’s – “Shoot and Run” and “Wasted” – eventually morphed into a full-length album, High School High, in 2018, solidifying hers as a name to watch. Currently, Latour is finishing up her freshman year at Columbia University, studying philosophy and political science.

Ori Dulitzki swapped slick basketball skills for soulful crooning when he discovered pop and R&B in his suburban Philadelphia high school. Motivated by his newfound passion, Dulitzki bought a microphone and a keyboard and immersed himself in music, teaching himself how to sing, play, write, produce and record. Via his mother’s tenacious efforts, one of Dulitzki’s demos fell into the right hands, and the aspiring singer/songwriter landed a publishing deal in New York. Dulitzki sequestered himself in an East Village apartment and immediately got to work, crafting a song after two months that earned him a spot on NBC’s new music series, Songland, on which he had the opportunity to perform for a receptive all-star panel. Encouraged by that positive feedback, Dulitzki is currently working on a project with an eye for a summer release.

Congratulations to Maude and Ori on this well-deserved recognition!