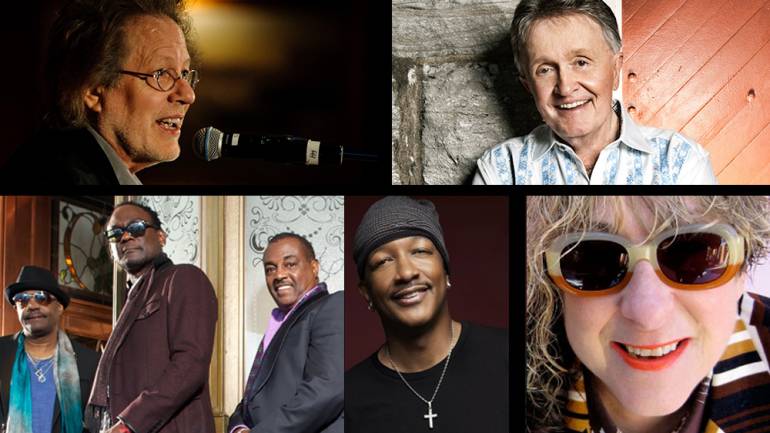 The Songwriters Hall of Fame announced its latest class of inductees for 2018, and BMI is very proud to count six of these remarkably talented songwriters as longtime affiliates. We happily join our friends at the Hall in celebrating their amazing music. Dedicated to honoring the contributions of the composers and lyricists of the world’s most celebrated popular music, as well as nurturing the next generation of songwriters, the Songwriters Hall of Fame will celebrate its newest class at its 49th Annual Induction & Awards Gala on Thursday, June 14 at the Marriott Marquis Hotel in New York City.

Establishing himself as a capable hitmaker right out of the box, Bill Anderson solidified his status as a songwriter to pay attention to with “City Lights,” a song penned when he was only 19 that Ray Price recorded and took to the top of the country charts in 1958 (Mickey Gilley also took it back there in 1975, with his cover version). That first success sent Anderson to Nashville and earned him a deal with Decca records. From there, his career as both a songwriter and a singer in his own right (accruing the stage name, Whisperin’ Bill Anderson, along the way, for his distinctive vocal style), fully blossomed. His work has been recorded by artists steeped in Nashville royalty, from Wanda Jackson, Jim Reeves and Conway Twitty through Brad Paisley, Kenny Chesney and George Strait, just to name a few. Anderson’s scored multiple hits in every decade since starting his career, to say nothing of also making a name for himself as an actor and television personality. Having released over 40 albums and reached the country charts No.1 spot seven times with songs like “Mama Sang a Song,” “Still, “I Get the Fever,” and more, Anderson is rightly hailed as one of the most successful songwriters in country music history, and he’s indeed still at it.

As the recipient of over 40 BMI awards, songwriter Steve Dorff is a truly apt inductee in the Songwriters Hall of Fame, as far as BMI is concerned. A consummate music creator, Dorff has proven himself as a songwriter and composer whose work has been recorded by over 400 artists from across the genre spectrum. His songs have dominated the charts, made several singers famous, scored countless movies and television shows and earned him GRAMMY and Emmy nominations along the way. More recently, he wrote music for the stage for 2016’s theatrical production of Josephine, and even published a memoir in 2017. When not crafting music for any number of projects, Dorff greatly enjoys performing his most-renowned songs at music venues across the country.

Kool & the Gang’s legacy is inexorably linked with celebration. Since their 1969 debut, their deft musical alchemizing of jazz, soul and funk has come to almost singularly define the sound of party music. From assertive, brass-laden anthems like “Funky Stuff” and “Jungle Boogie” to the quintessentially laid-back “Summer Madness” and irrepressible “Celebration,” their songs have informed popular culture, enriched iconic films like Rocky, Saturday Night Fever and Pulp Fiction, and earned Robert “Kool” Bell, Ronald Bell*, George Brown and James “JT” Taylor status as masters of their art. Collectively, the band hold a place in the GRAMMY Hall of Fame, earned two GRAMMY Awards, 25 Top Ten R&B hits, nine Top Ten Pop hits, 31 gold and platinum awards, 5 American Music Awards, and several GRAMMY nominations. While JT parted ways with the band in 1989, both he and Kool & the Gang remain active today. Adding to this august induction, Kool & the Gang are celebrating their 50th anniversary this year.

To read a definitive list of popular tracks, radio hits and bona fide timeless classics written by songwriter Allee Willis, one might be incredulous to learn that all these memorable songs – recorded by a dizzying array of artists from multiple genres – stemmed from a single writer. Willis has left her indelible mark on the edifice of contemporary popular music by way of writing both lyrics and music to songs like “September” by Earth, Wind & Fire, “Stir It Up” by Patti LaBelle, and “I’ll be There For You,” the theme song to Friends, recorded by The Rembrandts. Her songs have been featured in beloved films like Caddyshack, High Fidelity, The Karate Kid, Coming to America, Beverly Hills Cop and more. She has written for a pantheon of artists including the Pointer Sisters, the Pet Shop Boys, Justin Timberlake, Bonnie Raitt, Jimmy Cliff, Debbie Harry, DMC, Bette Midler, Aretha Franklin, Cyndi Lauper, Herbie Hancock, Toto, Bryan Adams, Diana Ross, Chaka Khan, Jennifer Hudson, Ray Charles, Weather Report, Dusty Springfield, Fantasia, Kirk Franklin, Tina Turner, Taylor Dane, the Emotions, Boy George Cher, Ashford & Simpson, Thomas Dolby, Dionne Warwick, Herb Alpert, Gladys Knight and many others. Were her credentials as a songwriter not enough, Willis is a versatile, multi-disciplinary artist with a muse that drives her to tirelessly explore, create and express.

Please join BMI in congratulating these estimable writers for their well-deserved accolades.