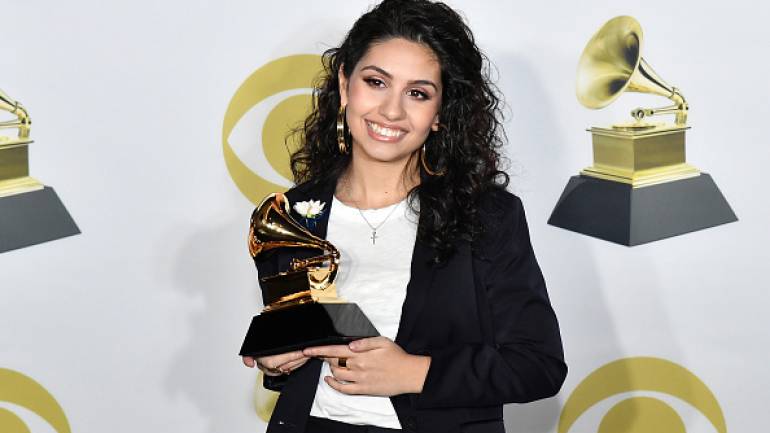 The 60th GRAMMY Awards returned to New York City, last night, for the first time since 2003, for a special anniversary celebration on the hallowed stage of Madison Square Garden. BMI songwriters from across the genre spectrum were on hand to claim their well-earned accolades for some of the year’s most memorable music.

Among BMI’s multiple-award-recipients, the songwriting team of Ray Romulus and Jonathan Yip (a.k.a. the Stereotypes) took home the coveted GRAMMYs for both Song of the Year and Best R&B Song for their work on “That’s What I Like” by Bruno Mars,* Ed Sheeran (PRS) claimed the Best Pop Solo Performance GRAMMY for “Shape Of You,” as well as the Best Pop Vocal Album award for ÷ (Divide), CeCe Winans earned Best Gospel Performance/Song for “Never Have to Be Alone” with Alvin Love III, and Best Gospel Album for Let Them Fall In Love, and Jason Isbell won Best American Roots Song for “If We Were Vampires” and Best Americana Album for The Nashville Sound. Composer Justin Hurwitz took home the GRAMMYs for Best Score Soundtrack For Visual Media and Best Compilation Soundtrack for Visual Media, both for his work on La La Land. Legendary composer John Williams won the GRAMMY for Best Arrangement, Instrumental or A Cappella for “Escapades For Alto Saxophone And Orchestra From Catch Me If You Can” as well the Trustees Award, which is an honor in the Recording Academy’s Special Merit Awards. Other 2018 honorees in this category include a Trustees Award for Sire Records executive Seymour Stein and Lifetime Achievement Awards for iconic R&B singer/songwriter Tina Turner, legendary British rock band Queen (PRS), influential New Orleans funk ensemble The Meters, and pioneering swing bandleader Louis Jordan.

Beyond the awards, the evening featured an array of striking performances. Luis Fonsi got the massive room on its feet for a performance of his runaway hit “Despacito,” while DJ Khaled, Rihanna and Bryson Tiller kicked up the energy with a rousing trek through “Wild Thoughts.” Lady Gaga played an emotional medley of “Joanne” and “Million Reasons” and Childish Gambino delivered a soulful rendition of “Terrified.” Maren Morris and Eric Church, flanked by the Brothers Osborne,* performed a poignant rendition of Eric Clapton’s “Tears in Heaven” in tribute to the victims of the Las Vegas shooting, while Gary Clark Jr. and Jon Batiste* performed “Ain’t That a Shame” and “Maybellene” in homage to rock ’n’ roll icons Fats Domino and Chuck Berry, both of whom passed way earlier this year.  Closing out the evening, Best New Artist GRAMMY-winner Alessia Cara (SOCAN) performed stirring rendition of “1-800-273-8255” with Logic and her fellow Best New Artist nominee Khalid.

Congratulations to all the BMI winners! Below is the complete list.

Song Of The Year
“That’s What I Like”
Ray Romulus & Jonathan Yip, songwriters (Bruno Mars*)

Best American Roots Song
“If We Were Vampires”
Jason Isbell, songwriter (Jason Isbell And The 400 Unit)

Best Arrangement, Instrumental or A Cappella
“Escapades For Alto Saxophone And Orchestra From Catch Me If You Can”
John Williams, arranger (John Williams)