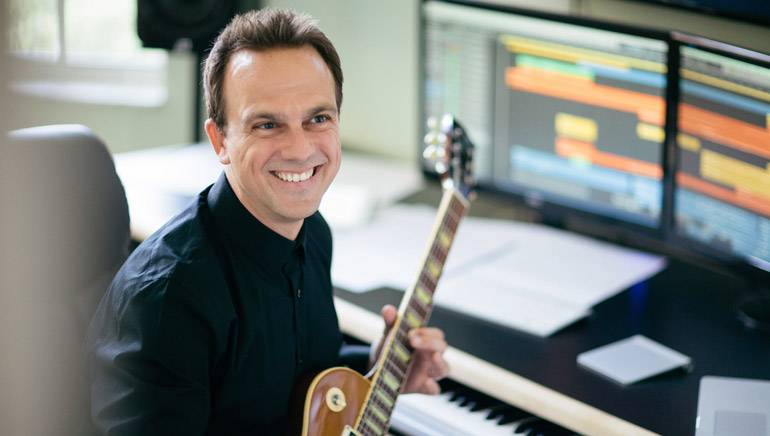 Award-winning BMI composer Carlos Rafael Rivera has a lot to show for his hard work. Between writing critically acclaimed scores for Universal Pictures’ A Walk Among the Tombstones and the highly anticipated new Netflix mini-series Godless, as well as his devout dedication to spreading his love of music to the students he teaches at the renowned Frost School of Music at the University of Miami, you would think he can’t possibly have time for more. And yet, he finds it. His esteemed work has been featured by some of the most prominent ensembles and soloists, including Arturo Sandoval, Colin Currie, Chanticleer, Cavatina Duo, the Chicago Sinfonietta, the American Composers Orchestra, and the Los Angeles Guitar Quartet. As a highly sought-after guitarist himself, Rivera has performed onstage as an opening act for the Who at the Hollywood Bowl; recorded studio sessions for Island/Def Jam and Universal Records; and had songs featured on soundtracks for Crash and Dragonfly, as well as ABC’s Scrubs, MTV, and VH-1. He has also served as Composer-in-Residence with the Miami Symphony Orchestra, as well as a musical consultant for Invitation to World Literature, an educational series funded by the iconic Annenberg Foundation.

BMI caught up with Rivera, who managed to also find time to talk with us about the work that keeps him going. Here’s what he had to say:

Tell us a bit about your dual role as a working composer and a teacher. How do the two fit together and does teaching inspire your compositional work or vice-versa?

I have been teaching and making music since my teens. Both play an important part in my musical life, driving me and giving me a sense of purpose.

Through teaching I feel ever connected to the music that younger musicians are making today, since I get to work with students at the highly-acclaimed Frost School of Music, where I am currently the Director of the Musicianship, Artistry Development and Entrepreneurship Program.

Through composing I feel I am able to musically grow by exercising and challenging my creative abilities, especially when given opportunities such as scoring a seven-episode mini-series like Godless for Netflix, or a fifteen-minute chamber work for Cedille Records commissioned by the Cavatina Duo.

How do you change “creative zones” to manage these aspects of your career?

It is quite challenging, depending on the amount of output expected by the writing or academic side.  But up until now they have been manageable, and both are quite creative and rewarding endeavors, I feel.

What skills do you think are most important when teaching burgeoning composers and how do you go about it?

Time management and people skills. These are almost as - if not more - important than developing your writing or teaching ability.

What do you wish you had known about the industry when you started?

How relationship-oriented it all is.  I’d always believed that the quality of the work would grant opportunities.  However, it is not enough to just produce quality work. Without fostering relationships, one can limit the opportunities to grow.

A Walk Among the Tombstones advanced you into the pool of possible Oscar nominees and it’s a very different story than your current mini-series Godless. Tell us about how you approached each project.

Having worked with the incredible Scott Frank on both of these projects, the difference was mainly that by Godless, we developed a shorthand, where I was better at translating Scott’s storytelling intentions through music. On both projects, I also performed many of the instruments, which gives them a handmade sort of feel. Scott and I also have a somewhat unorthodox approach, in that he will usually send me the screenplay, and the music I initially write is to the written word, not picture. This sets the tone and helps us realize what doesn’t work. I make what we call “Script Movies,” where I create a quick-time of the screenplay, set at a reading pace, and score the scene. It can be very effective in finding the rhythm of the music, and undoubtedly helped us in some of Godless’ set pieces.

My dream job would be to score Rian Johnson’s next Star Wars Trilogy, or James Cameron’s upcoming Avatar films. But I am sure I am not the only one with these aspirations. I do know how lucky I have been to collaborate with such amazing folks as Scott, as well as executive music producer T Bone Burnett, editor Michelle Tesoro, Sound Designers Wylie Stateman, Eric Hoehne, and producers such as Casey Silver and Steven Soderbergh in telling the story of Godless!

In 1995, I won the BMI Student Composer Award. It was the first affirmation of my commitment to study music composition from the outside world. During the award ceremony, I was able to meet the incredible Ralph Jackson, who was head of the Student Composer Awards, later became the head of the classical division of BMI (he has since retired).  Through the years, Ralph has been a mentor to me (and SO many other composers) in many ways. I feel privileged to call him a friend now.

Over the past five years, as opportunities opened up in the film scoring side, I was fortunate to meet Doreen Ringer-Ross, who as Vice President of TV, Film and Visual Media Relations at BMI, has been only kind, supportive, and keenly interested in my endeavors.

BMI has been alongside my entire career as a composer, and for that I could not be more grateful!