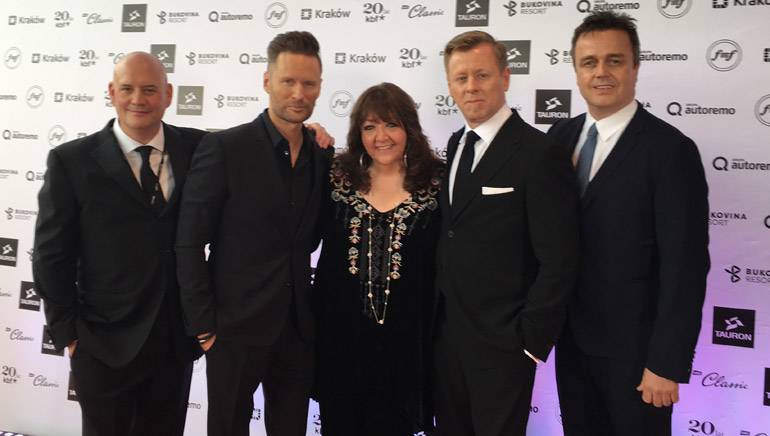 Pictured (L-R) are: BMI composers Trevor Morris and Brian Tyler, BMI’s Doreen Ringer-Ross and BMI composers Abel Korzeniowski and Sean Callery on the red carpet the night of the gala.

BMI Vice President, Film, TV & Visual Media Relations, Doreen Ringer-Ross, was a special guest representing BMI’s partnership in this year’s renowned Kraków Film Music Festival, held May 17-23 in Poland. The Festival, which is now revered as one of the largest and most prestigious film music festivals in the world, celebrated several of BMI’s most sought-after composers who participated, attended and were honored at the event.

Kicking off the event at the ICE Krakow Congress Centre was an opening night concert featuring the breathtaking music of Krakow-born Abel Korzeniowski, who left his hometown for Los Angeles 11 years ago to pursue a career in film and TV music. The adoring crowd welcomed him back, cheering as he conducted his award-winning music from Penny Dreadful and A Single Man, as well his score to Nocturnal Animals.

Other highlights of the festival included Jean-Michel Bernard’s “Cinematic Piano” concert featuring works by renowned BMI composers John Williams, Lalo Schifrin, and the late Bernard Herrmann. The next night, at sold out Tauron Arena (which seats an impressive 15,000), the festival’s 10th Anniversary Gala concert again featured the work of Korzeniowski, as well as highly regarded BMI composers Trevor Morris, Sean Callery (who also played piano with the orchestra) and Brian Tyler, along with featured gifted cellist Martin Tillman, also a BMI composer. The gala was then followed by a celebratory afterparty.

In addition to supporting these composers at all of these once-in-a-lifetime events, Ringer-Ross also participated in two insightful panel discussions. The first, entitled “Lyrics and Scripts: A Match Made in Film,” was hosted by Ray Bennet and featured Ringer-Ross along with composer/songwriter Gary Marlowe, publicist Ray Costa and agent Christine Russell. The second panel, entitled “Film Market: Welcoming the New Generation,” was hosted by Ray Costa and along with Ringer-Ross included ASCAP’s Shawn LeMone, publicist Jana Davidoff and agent Christine Russell. Ringer-Ross also participated in a lively and well-received Q&A session with BMI composer Brian Tyler.

The renowned Kraków Film Music Festival, which just concluded its tenth year, annually brings together film composers and music professionals for a series of masterclasses and concerts in the heart of one of Poland’s oldest, largest and most historic cities.