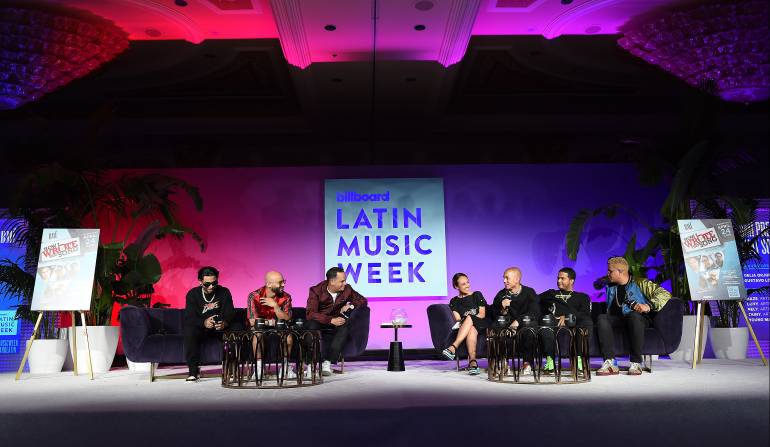 BMI presented its popular panel series How I Wrote That Song® during Billboard Latin Music Week on Wednesday, April 24, at the Venetian Hotel in Las Vegas.  This year’s all-star line-up featured award-winning producers Tainy, Luny, Young Martino, Nely and Haze with a topic that focused on the evolution of Latin urban music. The panel was moderated by BMI’s Vice President of Creative, Latin Music Delia Orjuela and CEO of Talento Uno Music Gustavo Lopez.

Throughout the event, panelists shared their stories behind some of the biggest hits in the Latin urban music scene. Tainy elaborated on the importance of being authentic and incorporating sounds from other genres in to his music, while Young Martino and Haze discussed the importance of trusting your work and getting comfortable with your creative process. Luny recommend that emerging producers understand early on how to demand credits on tracks and understand the business side of the of the industry, and as one of the original genre-blenders, Nely discussed his creative process behind the groundbreaking anthem “Rakata.” Backstage at the conference Orjuela presented BMI Awards to Luny  for “El Baño” and  Tainy for “Bella y Sensual,” “Como Antes” and “Hey DJ.”

Billboard’s Latin Music week hosted numerous panels featuring BMI singers, songwriters and producers. Superstar Ozuna, was interviewed by Billboard’s Leila Cobo on his ground-breaking year and Latin-crossover that topped the Billboard charts, such as “Te Bote” “Baila Baila Baila,” “El Farsante” to name a few. During the All In The [Rivera] Family, panel the Rivera family announced their first family tour which kicks off on December 7 at the Dolby Theater in Hollywood,and the legendary Juan Luis Guerra offered a rare sit-down Q&A with Cobo.