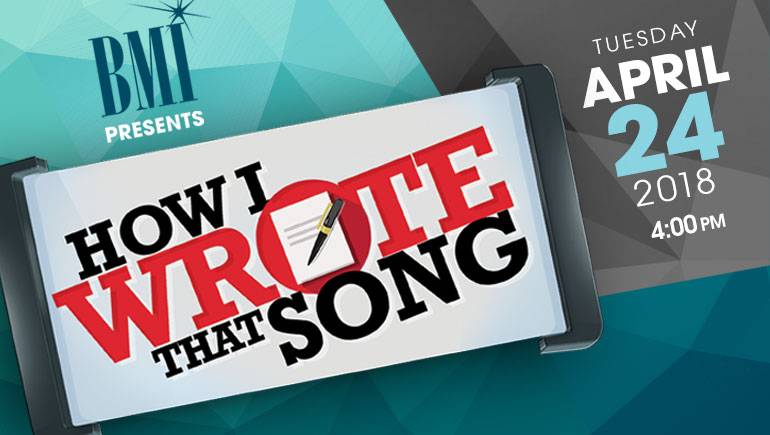 BMI is proud to present its renowned How I Wrote That Song event at the Venetian Hotel in Las Vegas as part of Billboard Latin Music week on Tuesday, April 24, 2018. This long-running panel series celebrates chart-topping singer/songwriters and producers, and serves as a platform for panelists to discuss the process of writing, producing and performing their hit songs. The informative and entertaining panel will be moderated by BMI Vice President of Creative, Latin Music, Delia Orjuela, and will feature some of the industry’s most talented Latin music creators, including Motiff, IAMCHINO, Jorge Gomez, Justin Quiles and Spiff TV.

“We are thrilled to add BMI’s How I Wrote That Song panel to our incredible lineup for Billboard’s Latin Music Week,” said Leila Cobo, Executive Director, Latin Content and Programming at Billboard. “This year is going to be the biggest and best Latin Music Week yet with a robust list of panels and conversations, including some of the most creative and talented artists in Latin music today. The stories behind the hits are endlessly fascinating and we look forward to hosting BMI and its writers!”

The event will be part of Billboards Latin Music Week, taking place April 23-26 in Las Vegas. How I Wrote That Song will be held in the Marcello Ballroom at the Venetian Hotel at 4:00 p.m. on Tuesday, April 24. To join the conversation, use hashtag #BMIHIWTS. 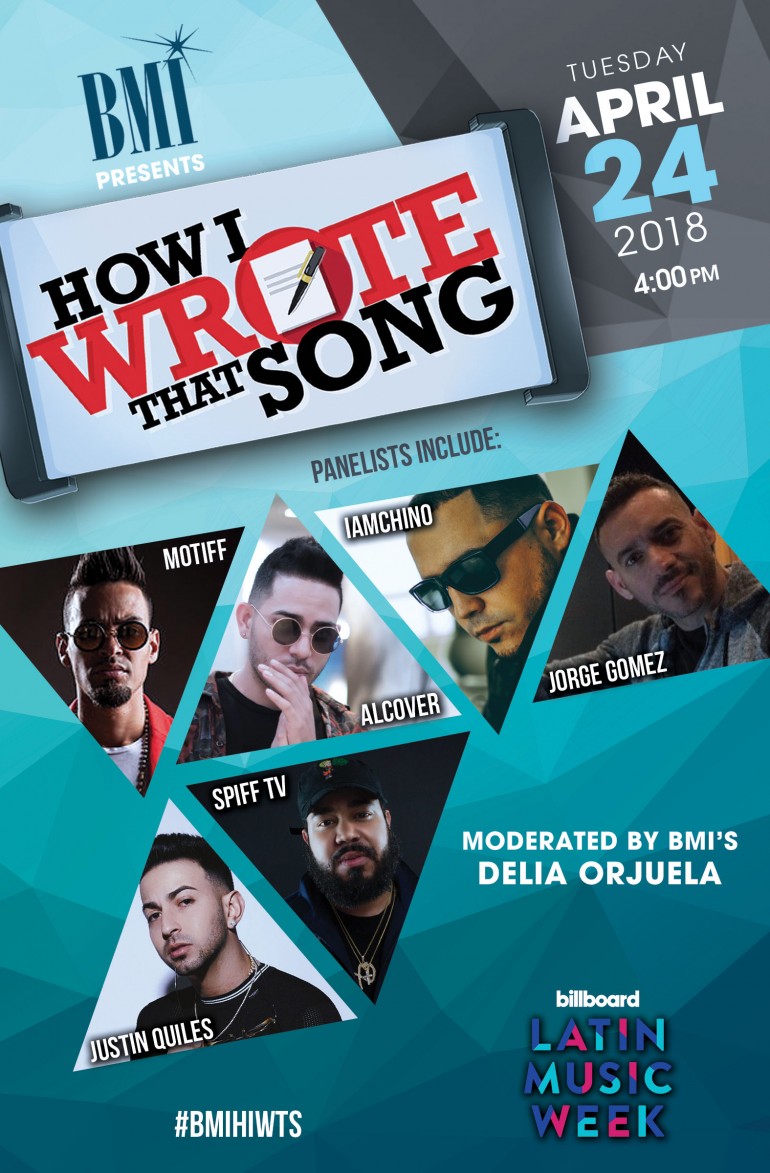 About the panelists:
Motiff: After arriving to Miami in 1996 and dedicating his time to the recording studio, Motiff gradually found himself working alongside the legendary Emilio and Gloria Estefan. Meeting Pitbull would also prove to be pivotal for Motiff. His career kicked into high gear as he found himself working with a who’s who of Latin music, and earning an array of industry accolades, including a Latin GRAMMY for Best Tropical Fusion Album in 2016 for his work on Gente De Zona’s Visualízate. The groundbreaking anthem he produced for that album, “La Gozadera,” provided the opportunity to work with Marc Anthony, and paved the way for further projects, including Jennifer Lopez’s forthcoming release.

Alcover is one half of the Dominican Republic born hit-making production team A&X, comprised of Alcover (Milton Restituyo) and Xtassy (Juan Abreu) who were raised in New York. Xtassy and Alcover are two of the top songwriters and producers in Latin Music, and their creativity has earned them recognition across genres, and swiftly gained worldwide acclaim. Their musical adventures and dedication have continued to propel them, resulting in multi-platinum hits for artists like Don Omar, Carlos Vives, Romeo Santos, Pitbull, Chino & Nacho, Yandel & J Balvin, to name a few. Alcover’s recent work includes “Mala Actitud” for CNCO, “Happy Happy” by Nacho, “No Te Vas” (remix) for Nacho, Wisin Y Noriel and his own song entitled “No Te Dejare Caer.” He has also added Latin Billboard and GRAMMY® award-winner to his long list of achievements.

IAMCHINO: His connection with Pitbull began when he was named as the official DJ for Mr. Worldwide. In addition to touring extensively with Pitbull and fulfilling his passion for DJ-ing, he took time to expand into the field of producing. As a producer, he’s earned a GRAMMY award for his work on Pitfall’s Dale and a Latin GRAMMY for his work on Gente De Zona’s Visualízate. IAMCHINO has penned and produced hits for artists like Enrique Iglesias, Ricky Martin, Yandel and Wisin, amongst others. His single “Ay Mi Dios,” featuring Pitfall Yandel and Chacal, has nearly 500 million views, and earned chart-topping success on Billboard’s Latin Airplay, Tropical Song and Latin Pop Song charts, among others.

Justin Quiles: Quiles is considered to be one of the most important figures of the new generation of Latin urban artists. His first studio album The Promise debuted in July 2016 and was #1 on Billboard’s Latin Rhythm Albums list. His hit “Si Ella Quisiera” remained atop Billboard’s Latin Airplay, Latin Pop Songs, Top Latin Albums, Hot Latin Songs and Tropical Songs charts. Quiles has also penned international hits for renowned artists such as Yandel, J Balvin and Maluma, and was the mastermind behind hits such as “Maria,” “Me Curare,” and “Orgullo” (Remix with J Balvin), which have all reached top positions on the Billboard Charts. His most recent releases include “Pendiente de Usted,” “Monstruo,” and “No Quiero Amarte” with Zion y Lennox.

Spiff TV: Known throughout the music industry as a mega influencer and “go-to-guy,” Spiff TV is greatly respected for his production, video direction and creative skills. Spiff has incorporated his innovative skills into his forthcoming release, The Union. Top singles from the album have included the Bachata and R&B infused singles “Mi Combo - My Squad,” featuring Yandel and Future and “Just as I Am” featuring Chris Brown and Prince Royce, which was nominated for a Latin GRAMMY and reached top 10 on the Billboard Tropical Charts. In January 2018, Billboard Magazine named Spiff TV the number one Latin artist to watch in 2018.