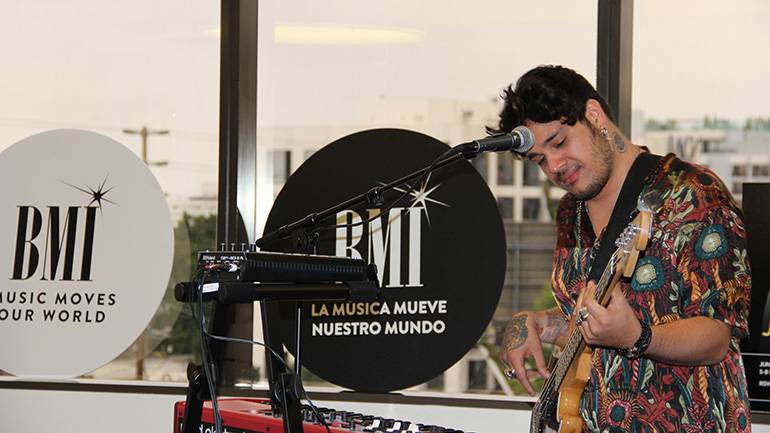 BMI recently hosted a private showcase in its Los Angeles office in collaboration with peermusic for Colombian singer/songwriter/producer and multi-instrumentalist Jona Camacho, to celebrate the U.S. release of his EP Plástico. This latest work features five original tracks all written and produced by Camacho in his own studio in Bogota, Colombia. Camacho is renowned for fusing rock, pop and R&B in his work, woven together by his impressive vocal abilities, and demonstrating heartfelt artistry.

Camacho gave attendees a first taste of his vocal prowess during the stripped-down showcase with songs such as “Esta BN,” “Dulce Vino,” “Caramelo,” “Soy Un Loco” and “Si Nos Siguen” from his repertoire. Attendees included peermusic executives along with members of the songwriting community, industry VIPs and representatives from the local music scene.

The Colombian artist will embark on a limited run of performances in the U.S. this summer to promote the release of Plástico. His U.S. debut will take place in Los Angeles at the LatinX concert series Chido/Chevere/Cool on June 22 at the Hi Hat in Highland Park hosted by KCRW DJ José Galván. He will also be part of BMI’s annual showcase “Verano Alternativo” in support of the 20th edition of Latin Alternative Music Conference (LAMC) on Tuesday, July 9, at Drom (85 Avenue A, New York, NY) in the East Village. The summer concert will also feature performances by Cable Head, CRISTNA, Sophy Mell, Sebastián Otero, and Nohemy.