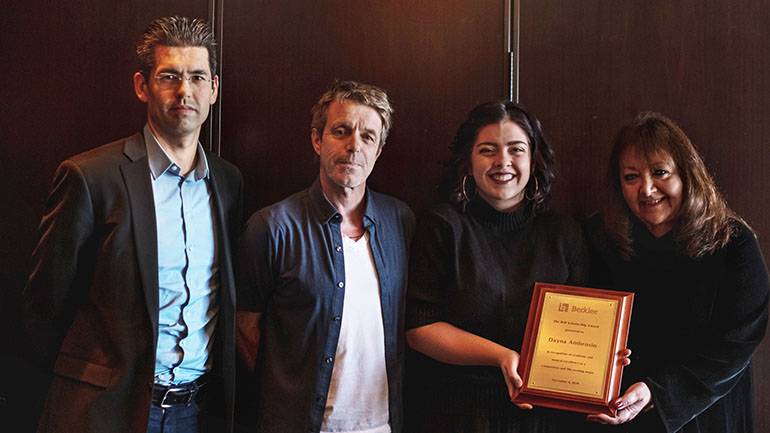 On November 4, BMI’s coveted film scoring scholarship was awarded to Berklee College of Music student Dayna Ambrosio by BMI Vice President of Creative Relations, Doreen Ringer-Ross, and award-winning composer Harry Gregson-Williams during the 21st annual “BMI Day” at the prestigious college. The scholarship is presented each year to a film scoring student who demonstrates a high level of musical ability and potential for career success. In addition to the scholarship presentation and luncheon, “BMI Day” at Berklee also consists of a full day of sessions, Q&A’s, meet and greets, seminars and a keynote, which was delivered by Gregson-Williams.

Recognized for scoring popular films such as The Chronicles of Narnia:The Lion, the Witch and the Wardrobe, Déjà Vu, X-Men Origins: Wolverine, The Martian and the Shrek franchise, Gregson-Williams is an in-demand award-winning composer with numerous accolades, including the Hollywood Film Composer of the Year award, and the BMI Icon Award, which he received at the 2018 BMI London Awards.

BMI supports Berklee’s commitment to excellence in music and film scoring, and is proud to continue supporting emerging composers in their burgeoning careers by awarding the scholarship and presenting “BMI Day.” In keeping with those traditions, BMI’s Ringer-Ross has also contributed content to Berklee’s online film scoring program, which award-winning BMI composer Alison Plante now runs. Ringer-Ross also provides insights to students each year on career development. This year’s scholarship winner, Dayna Ambrosio, was selected to receive the honor by Berklee’s film scoring department, which has increasingly supported women entering the industry.