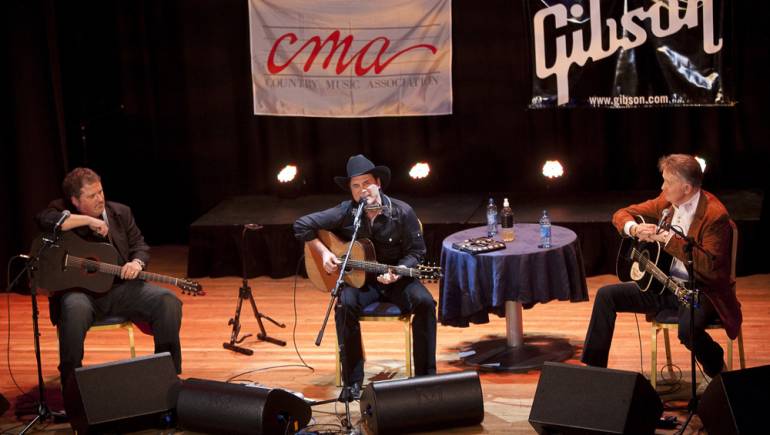 Bob DiPiero, Clint Black, and Bill Anderson perform at the Islington Assembly Hall in London during the CMA Songwriter Series.

Prolific BMI songwriters Bill Anderson, Bob DiPiero and Clint Black took country music to the U.K. February 22-24 for the CMA Songwriter Series, co-presented by BMI and the CMA. The tour made stops in London, Belfast and Dublin, where Anderson, DiPiero and Black performed hits from their extensive repertoires in packed rooms.

A member of the Country Music Hall of Fame and BMI Icon, Anderson has written recent hits such as “Whiskey Lullaby” and “Give It Away,” as well as golden-age classics “City Lights,” “Mama Sang a Song,” “Still” and more. He was also a chart-topping recording artist, known to many as “Whisperin’” Bill. Bob DiPiero has also built an incredible career thanks to smashes including “Blue Clear Sky,” “Wink,” “Take Me as I Am,” “Church on Cumberland Road,” and so many more. Clint Black has recorded and written 22 No. 1 singles such as “Killin’ Time,” “State of Mind,” and “When I Said I Do” (a duet with his wife Lisa Hartman Black), fueling the sales of more than 20 million albums.

“When we began the series in 2005, I never dreamed it would include such an honor as being asked to perform in England and Ireland,” said DiPiero. “These CMA Songwriter shows are one-of-a-kind performances by some of the very best songwriter/storytellers on the planet. I’ve never seen a more honest, authentic, entertaining musical performance anywhere. When I get to perform with Icons such as Bill Anderson and Clint Black, I feel like a fan with the best seat in the house.”