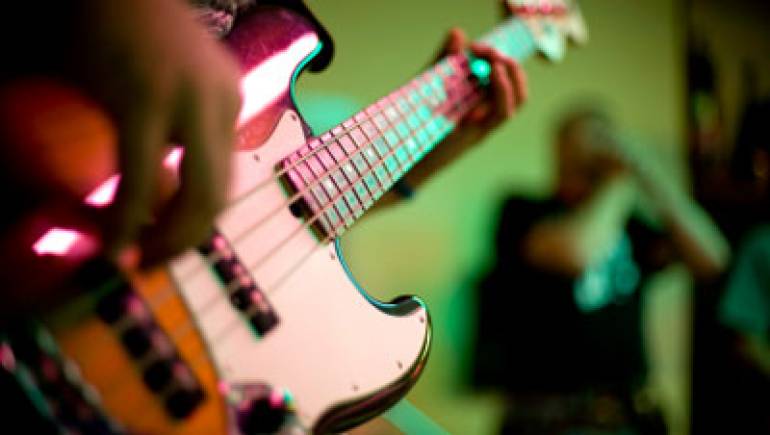 To many people, the bass is the least important part of a recording project, which is a strange thing. In fact, when paired with the right drummer, a good bassist is capable of giving a demo a rock-solid foundation (and if you don’t have bottom, you don’t have anything, after all). Smart bass players intuitively know how to lock with the bass drum (or, conversely, play against the song’s main rhythm), provide inventive melodic ideas such as substituting thirds and fifths in place of the root note, while adding all necessary fills and walk-ups. It’s not a job to be taken lightly.

Over the years, players like Motown’s James Jamerson, the Beatles’ Paul McCartney, jazz-fusion ace Jaco Pastorious and many others helped give the bass a more prominent role in recorded music. Understanding the techniques that these artists helped make famous is a good place to start.

One of the oldest and most important tools in a bassist’s skill set is known as “locking-in.” To properly lock in, the bassist finds the “pocket,” which is typically the rhythm pattern established by the bass drum. For instance, in 4/4 time, the bass and bass drum would lock on the first and fourth beats, perhaps with the accent on the “1.” When locking in, very often less is more. In many Beatles songs, for instance, bassist McCartney typically alternates between the I (root note) and the V. This kind of playing nicely supports the rhythm without drawing undue attention to the bass guitar — the bass is actually “felt” more than it is heard. A more sophisticated approach to locking in can be found on the Red Hot Chile Peppers’ ’90s hit “Under the Bridge.” If you listen to the song’s third verse (“It’s hard to believe…”), you’ll notice the way bassist Flea’s notes fit perfectly in time with drummer Chad Smith’s syncopated bass-drum pattern — both players even omit a single note every other verse on purpose.

While bass lines tend to favor the root notes in any given chord progression, sometimes a little creativity can go a long way. On Pet Sounds, the Beach Boys’ legendary masterpiece, songwriter Brian Wilson practically reinvented rock bass technique with moving bass lines that employed thirds, fifths, even major-sevenths against the main chord progression, rather than using the standard root notes (for that matter, Wilson often used two basses simultaneously — one electric and one acoustic upright). Wilson’s work has impacted everyone from Paul McCartney (whose playing on the Beatles’ Sgt. Pepper album was directly influenced by Pet Sounds), to Primus bassist Les Claypool, who once called Pet Sounds “the incredible bass player’s record.” Melody also plays a key role in the development of a bass passage. A good example of a “musical” bass line can be heard on Led Zeppelin’s “Ramble On,” a song that stands out mainly due to bassist John Paul Jones’ skillful playing.

It is also important to have the right kind of bass tone in order to match the type of music you’re making. Strings are a good place to start: For example, flat-wound strings, which produce a darker tone, are typically preferred by traditional jazz and classic-rock bassists, whereas bassists who record funk, metal or modern rock often favor round-wound strings for their brightness and flexibility (there are also half-wound strings, which combine the articulation of round-wounds with the feel of a flat-wound string). Altering the tone control on both the bass and the amp can help the bassist achieve the desired timbre. And while bassists generally prefer playing with their fingers, some may use their thumb in order to achieve a rounder sound, or even a very thick pick for greater articulation. Voicing is yet another key element: For instance, an open G (first string) will sound quite different from a fretted G played on the second string, fifth fret, or, for that matter, the third string, 10th fret. The farther up the neck you go, the rounder and louder the tones tend to become.

Of course, even the best-sounding bassist will be wasted if not recorded properly. Rather than record off an amp, many bass players (and engineers) prefer going “straight in” by means of direct-injection (DI), using a device that boosts the instrument’s signal (while often adding tone as well) on the way into the console or other recording apparatus. In addition to providing a “cleaner” bass sound, going direct can often help eliminate the problems commonly associated with live recording, such as excessive bleed from nearby instruments.

On the other hand, if the bassist has an exceptional-sounding rig (or if the bass is an upright), live miking is the way to go. Inexpensive dynamic mics such as the Shure SM58 are suitable; however, mics with lower-frequency characteristics (such as the large-diaphragm dynamic AKG D112 or EV ND/868) make an even better choice. Unlike guitar-amp recording (which typically involves placing a dynamic mic only a few inches from the grille cloth), it is usually best to leave some space between the mic and the bass amp — you could set up as much as two feet from the source, or try a few different positions and choose the one that works best for your particular amp and/or recording environment. Also, keeping the amp volume at a lower level will prevent bass over-leakage.

(Not that you necessarily have to choose between miked and direct bass, by the way — pro engineers frequently use a combination of the two, then blend the parts together later on.)

Once the bass is recorded, you’ll want to make sure that it “sits” properly in the mix. Start with a relatively low level and gradually move the bass into position; depending on the type of music, it’s not always necessary to have the bass be quite so prominent (sometimes all that is needed is for the kick drum to “push out” the bass notes). If more emphasis on the bass is required (i.e., when recording prog, r&b or metal, for example), or if the bass and bass drum are going in different directions, you may have to work a little harder. Adjusting the EQ settings (such as “scooping” some of the mids and/or low end) or perhaps even adding a bit of compression can often help you get the sound you’re after.