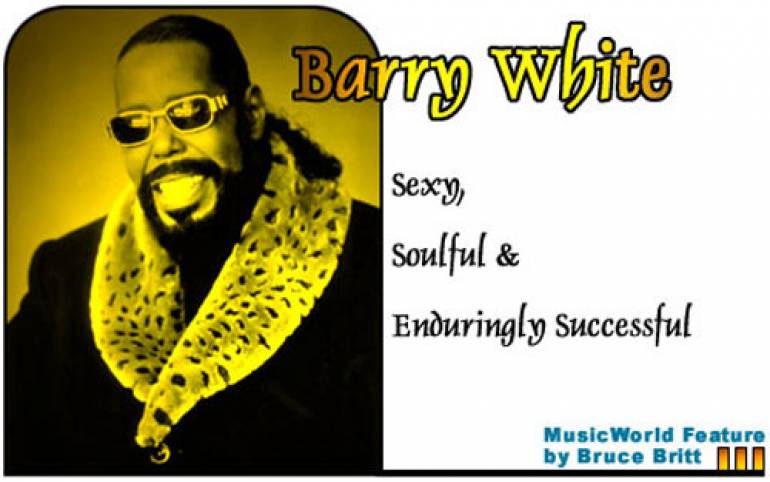 Befitting his burly frame, Barry White's shadow looms triumphantly over the contemporary r&b landscape. Long before sensual soul was fashionable, White was singing and composing erotic r&b ballads as potent as Viagra. But while most critics focused on the singer's lyrics, many overlooked the Gershwinesque splendor of White's music. Seventies hits like "Never, Never Gonna Give Ya Up," "Can't Get Enough of Your Love, Babe" and "You're the First, the Last, My Everything" boasted symphonic arrangements and sleek rhythms that presaged the disco boom. Moreover, White rarely resorted to pelvis-thrusting histrionics during his performances. Though his lyrics throbbed with sexual urgency, the singer comported himself like a gentleman on stage.

Today, White's influence can be heard in the sexy sounds of many contemporary soul vocalists. What's more, public interest in White remains high. In 1999, the singer was profiled on VH-1's popular biography series, Behind the Music. What's more, his most recent album was certified gold for sales in excess of 500,000 copies. Titled Staying Power, the album's title sums up White's enduring career.

Known to fans as "The Maestro," White has been satisfying soul music lovers for nearly 30 years. Raised in Los Angeles, he was initially inspired in the '60s by the songwriting team of Holland-Dozier-Holland and The Supremes. White's breakthrough musical project was Love Unlimited, a female trio featuring his wife, Glodean. The group's 1972 debut album went gold and yielded the hit single, "Walkin' in the Rain with the One I Love."

White parlayed that initial success into a high-flying solo career. His 1973 debut album, I've Got So Much To Give, featured the single, "I'm Gonna Love Ya Just a Little More, Baby." The tune bore all the hallmarks of the White sound: sophisticated r&b melodies complemented by soaring strings. By the close of the '70s, White had produced 22 albums and released a slew of hit singles such as "It's Ecstasy When You Lay Down Next to Me," "What Am I Gonna Do With You" and "Let the Music Play," among others.

White continued to chart in the '80s with hits like "I Wanna Do It Good to Ya" and "Sho You Right." His winning streak stretched into the '90s with the 1994 album, The Icon Is Love, which sold over 3 million copies. His infectious 1998 single, "Practice What You Preach," landed the singer back atop the Billboard r&b chart.

In celebration of his remarkable career, White is slated to release a two-disc compilation in April 2000 titled The Ultimate Collection. Featuring 30 of the singer's greatest hits, the compendium bears testament to the enduring legacy of an r&b legend.