Posted in MusicWorld on August 27, 2014 by Dave Simons 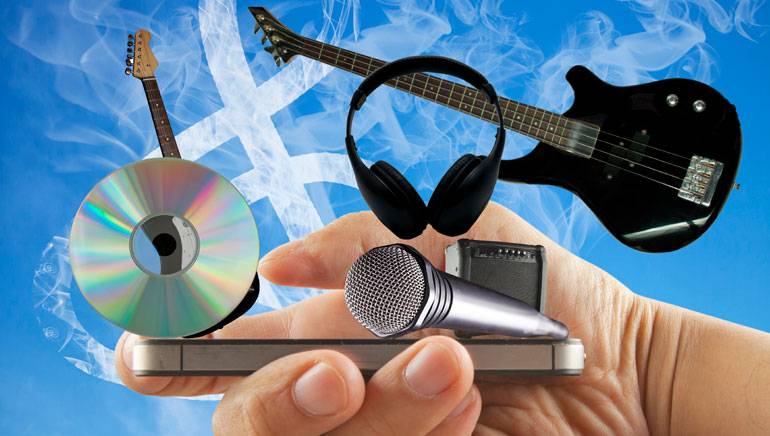 Unlike our tape-threading ancestors who needed big, pricey gear in order to sound good, these days, demo making can be accomplished on an increasingly small budget, using equally miniscule apparatus. In the digital domain, computer-based software programs and peripherals offer the most bang for the buck, however the proliferation of low-cost (or even no-cost) recording apps for both Apple’s iOS and Google’s Android operating systems make it possible to capture basic sound ideas right on your mobile device, anywhere at anytime.

As one might expect, anything that portable and convenient comes with a few drawbacks. Since smartphones and tablets typically utilize a single combined connector for both incoming and outgoing signals, in many instances you’ll need some kind of stand-alone interface in order to record a lined-in instrument while simultaneously monitoring the mix. Then there’s the issue of latency — i.e., the audible delay between an incoming signal and the monitored sound — a problem that is more prevalent on Android-based devices (and is one of the main reasons why Apple’s GarageBand continues to hold sway in the mobile-recording sweeps).

This is not to say that Android users don’t have any viable options. For instance, eXtream Software Development’s Audio Evolution Mobile DAW provides GarageBand-like features and functionality including a virtual instrument library, effects bank, as well as nonlinear/nondestructive editing. Also impressive is the non-multitrack Field Recorder app (from Pfitzinger Voice Design), which offers high-quality stereo recording with limiting and equalization functionality, suitable for no-fuss live tracking or on-the-go demo making.

Naturally the whole point of mobile recording is the ability to make spontaneous tracks without having to schlep extra cables or boxes. Assuming your app includes auto-level or limiting (in addition to minimizing distortion, this provides a nice, punchy, live sound); the most expedient approach is to record using your phone or tablet’s built-in microphone. Still, having the means to attach an external microphone or line-level instrument is worth considering, particularly when a more polished product is desired. While the market is teeming with mobile-specific mic models, you could conceivably use one of your own studio mics outfitted with a XLR-to-TRRS adapter for patching straight into a device’s 1/8-inch jack; for phones and tablets that support USB signals, a basic converter/preamp, such as Blue Microphone’s Icicle adapter, allows you to transform and step-up any XLR-connected microphone when used in conjunction with a USB-OTG adapter (the Icicle also comes with 48V phantom power for attaching condenser mics). Apple demo makers running GarageBand or other iOS-based app can expand their capabilities with an intermediary device such as TASCAM’s iXZ Mic/Instrument interface, which accepts both microphone and line-level instrument connections for latency free multitrack recordings.

When it comes to mixing or exporting your tracks, conventional wisdom favors listening through near-field monitors, since prolonged headphone usage not only can lead to poorly balanced sound (due to the proximity of the signal to the eardrums), but, under certain circumstances, may also be hazardous to your health — just ask Pete Townshend, who blames his own auditory troubles on excessive earphone volume.

On the other hand, headphones are pretty much unavoidable when going mobile. Therefore, in addition to maintaining a safe volume level, consider a set of headphones that can provide you with a more accurate mix, such as those with diffuse-field capability (for “truer” EQ); an acoustic simulator or headphone virtualizer can also help alleviate spatial disorder. One of the more interesting and recent headphone innovations comes from audio technology developer DTS, whose new Headphone:X solution enables mobile users to achieve a pro-quality “personal” surround-sound mix through a conventional set of headphones (DTS is currently in the process of deploying the Headphone:X solution to a number of leading headphone manufacturers).

The last (and arguably most important) step in the music-making chain, mastering involves equal parts balancing, EQ’ing, and general enhancement of the material at hand, taking into account a number of factors that include genre, radio compression (since some formats squash more than others), as well as the specific taste of the artist. In the real world, mastering — which essentially makes a record sound like, well, a record — is a job that is best left to qualified individuals. However, that doesn’t mean you can’t try experimenting on your own while making practice demos on the fly. For iPad users, iOS-based platforms like Positive Grid’s Final Touch provide access to a variety of traditional mastering tools, such as pre- and post-equalization, stereo imaging, dynamic-range expansion and more.