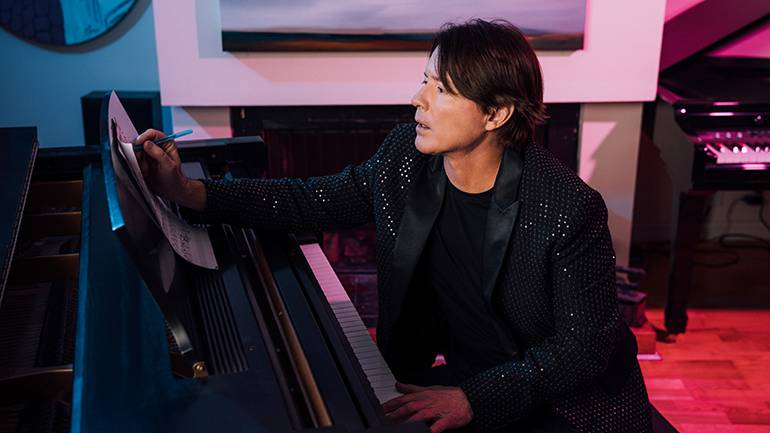 Pianist and composer Arthur Hanlon didn’t let a pandemic stop him from recording an album he’s dreamt about for decades—Piano Y Mujer, (translated as Piano and Woman) a collaborative effort between Hanlon, five exceptional female vocalists, and producer and multi-instrumentalist Motiff.

Hanlon first considered the pure, raw power of the piano and the female voice as a teenager playing professional gigs around his hometown of Detroit. Born into a large Irish American family—Hanlon is one of seven children—he started playing piano at age 6, inspired by the vibrant musical influences of his hometown. He later studied piano at Michigan State University and earned his master’s in piano performance from Manhattan School of Music, where he lived in Spanish Harlem and fell in love with Latin music.

In 2005, Hanlon became the first pianist to hit No. 1 on the Billboard Latin charts with his hit “La Gorda Linda.” He joined Sony Music Latin in 2016 with the release of Viajero, which included a DVD that documented his travels through eight countries—Argentina, Colombia, Brazil, Italy, Portugal, Spain, Mexico, and Cuba. BMI chatted with Hanlon about his latest release, his musical inspirations, and why young songwriters shouldn’t be deterred by the word “no.”

Well, the official title, Piano Y Mujer, was born last June in the middle of the pandemic, but I actually fell in love with the concept when I was 17 years old and began to play professionally in Detroit. Bars, hotels, parties—anything where I could make a few bucks playing music—and if the clients couldn’t afford to hire our whole band, the agency would say, “OK, we’ll send Arthur and his piano with the female vocalist.” Literally hundreds of times! So, it’s a format that I truly love and when the pandemic hit, I thought to myself, now is the perfect time to make this concept that I have always dreamed about into a reality.

The album release was accompanied by a special televised concert—with a 10-piece/all-female band, a gospel choir, and a mariachi ensemble—initially airing on HBO Max. How did it feel to play on stage with other artists after being unable to do so during the pandemic?

One word: EUPHORIC! The pandemic created such a weird energy; I remember like yesterday walking into the Faena Theatre in Miami to shoot the special with two masks on, and Kany Garcia walks up with a mask and a shield on. We just stared at each other with this look in our eyes like, “THIS IS INSANE—WHAT ARE WE DOING?!” But peeling off the masks, getting up on stage and performing again was so liberating—it just released all this pent-up, beautiful musical energy in everyone on that stage. The special also starts airing in July throughout Latin America on the Sony Channel, so we’re all really happy we were able to create some positive energy in the midst of such crazy and uncertain times.

You worked with producer and multi-instrumentalist Motiff on this album. As an instrumentalist and songwriter, what makes for a strong collaboration with a producer?

For me, collaborations are all about chemistry. Just like when you are introduced to someone at a party, sometimes there’s chemistry and sometimes there’s not. The day I met the insanely talented Motiff several years ago there was an instant musical click. In preproduction for Piano Y Mujer, as he also plays piano, we would hang for hours at my studio or his studio—each of us sitting at a different piano—and just brainstorm musical ideas. It was an incredible experience. And as we had no planes to catch or concerts to rehearse for, we had time—lots of time to explore, experiment, create, and look for the magic in the music.

For your 2016 release Viajero, you traveled around the world with a documentary film crew in search of iconic Latin songs. How did this experience shape you as an artist?

Viajero was my first project with Sony and was the product of a brainstorming session with Afo Verde (Chairman & CEO Latin America, Spain, and Portugal at Sony Music) and Alex Gallardo (President, Sony Music U.S. Latin) and made a huge impact on me as an artist, and also as a global citizen. To film and play piano with Armando Manzanero in his studio in Mexico City, having a 2:00 a.m. jam session playing Fado in a club in Lisbon, kicking a soccer ball around in Rio de Janeiro, and then playing Samba and Bossa Nova—all was a dream come true. As an artist it totally reenforced in me the notion that the only way to keep growing musically is to keep exploring and looking for the musical magic that’s all around us.

You grew up in the musically rich city of Detroit. How did you discover your passion for music, particularly Latin music?

I truly believe that music, piano, and then Latin music found me. My dad brought home a little piano as a Christmas present for the kids (there are seven of us) when I was 6 years old, and I just could not stay away for even a day. Playing gigs as a teenager with much older Motown studio guys that stayed in Detroit after Berry Gordy moved to L.A. really taught me how to think on my feet, improvise, write songs, and come up with grooves. Then, while living in Spanish Harlem while studying piano at Manhattan School of Music, Latin music was everywhere. So, playing Latin gigs just seemed to me to be a logical progression from playing blues and Motown in Detroit. My time in New York completely changed the direction of my entire career.

You’ve collaborated with legendary artists including Gloria Estefan, Arturo Sandoval, Natalie Cole, and Marc Anthony. Are there any dream collaborations on your bucket list?

Totally—LOTS of dream collaborations to do! I just don’t know what they are yet because for me, they always arise after exploring and searching for musical contrasts and for “new and different,” and then one day, they manifest themselves organically. I’m working on a really cool collaboration with Natanael Cano right now and brainstorming with Carlos Vives to do a Detroit Blues/Cumbia thing.

What’s the story behind your new piano endorsement deal with Yamaha?

Talk about an organic collaboration! For Piano Y Mujer, some songs are super rhythmic with Latin tumbaos, and others are very intimate. So, I really wanted that signature Yamaha acoustic sound for both the album and the HBO special—bright and bold with lots of depth, resonance, and a big bass, but at the same time very warm and poetic sounding. We contacted Yamaha to start a conversation and after they saw the special, we just continued talking. In December I played a beautiful red Yamaha grand for a Christmas special that I did. Then in March/April, a blue Yamaha for TV appearances for the release of Piano Y Mujer. And now we’re in a formal partnership and I’m super happy!

Kind of all over the map, but my musical formation was hugely impacted by the classics: Motown legends, Grupo Niche, Juan Luis Guerra, Rubén Blades and Willie Colón—can’t forget Elton John, Harry Nilsson, The Beatles, and of course Bach, Beethoven, and Mozart!

What advice would you give to a young songwriter who is just getting started in the music industry?

The word “no” does NOT exist. While you will hear it a lot, it is to be ignored. The only thing the word “no” really means is just, “not right now.”

How did you first start working with BMI, and how has this relationship impacted your career over the years?

I signed with BMI right out of music school, and it’s been an awesome ride!! They really are the best. BMI has always “got me” and my hybrid musical mentality and have been hugely supportive. And speaking of Piano Y Mujer, the ultimate icing on the musical cake is that the project manager from my very first successful album 16 years ago was a young, super creative, talented and intelligent woman right out of college. We became lifelong friends while working on my album together. My nickname for her back then was “La Flaca Flores” but now she’s more commonly known as Alex Flores of BMI.