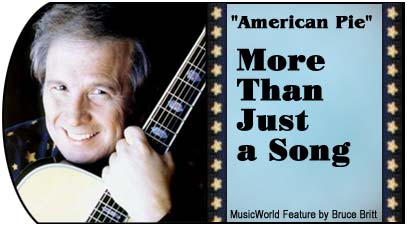 Thirty years ago, singer/songwriter Don McLean accomplished what every artist dreams of: He composed a masterpiece.

Titled "American Pie," McLean's tune lamenting U.S. cynicism and eulogizing late rock pioneers Buddy Holly, Richie Valens and the Big Bopper has achieved mythic status. The song topped the pop charts for four weeks in 1971 and has since become as much a part of U.S. folklore as hot dogs and apple pie.

Now, in an ironic turn of events, McLean's somber paean to innocence lost has been updated by Madonna, the controversial singer who's made a career of artfully testing the limits of decency. Featured on the film soundtrack The Next Best Thing, Madonna's interpretation has rocketed up the pop charts, resulted in a hit video and helped revive interest in McLean's magnum opus.

Interestingly enough, Madonna isn't the only one paying homage to "American Pie." In 1999, rock satirist Weird Al Yankovic scored a hit with "The Saga Begins," a parody of the Star Wars phenomenon set to the tune of McLean's legendary song. The hit teen film American Pie was named after McLean's tune, while a recent America Online poll ranked "American Pie" as the second favorite song of the past millennium. Now, thanks to Madonna's hit interpretation, McLean is the only artist thus far to have scored a multi-millennial hit.

"I'm just delighted," McLean recently told BMI. "Madonna's version has done a lot for the song and for me. I think some songs have kinetic energy - they keep picking up speed as they go. Certainly, 'American Pie' is one of these songs."

"It's so much more than a song," McLean says. "There are trademarks associated with it. There are college courses that examine it. There are probably 20 websites devoted to it. It's a song people have used in a variety of ways."

"American Pie" seems as much a bane as a blessing. It's popularity has overshadowed other McLean hits like "Vincent (Starry, Starry Night)," "And I Love You So," and "Castles in the Air." Moreover, some critics have panned the song's labyrinthine lyrics. In their 1991 book, "The Worst Records of All Time," authors Jimmy Guterman and Owen O'Donnell described "American Pie" as "an unasked-for critique of music during the '60s."

For his part, McLean dispels rumors that he temporarily stopped performing the song. Insisting he has tremendous affection for "American Pie," McLean joins the world in celebrating the song's impending 30th anniversary.

"I have never said a bad thing about the song," the singer says. "I was poor when I wrote it, and it made me a millionaire overnight. Believe me, I'm not upset about this song."