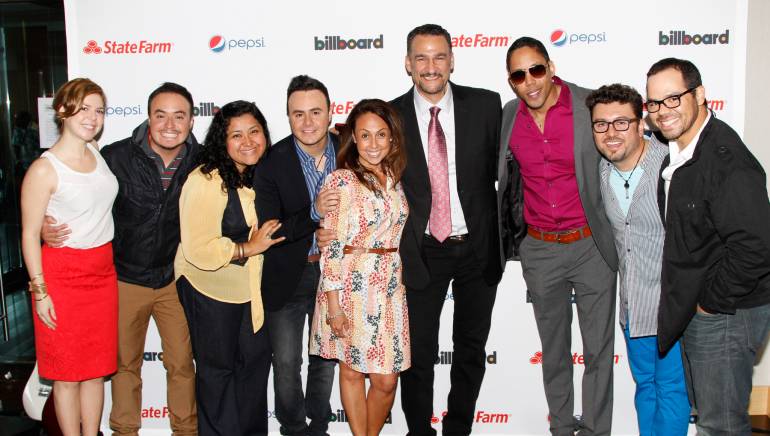 BMI’s “How I Wrote That Song” panel during Billboard Latin Music Conference week included a stellar lineup of Kike Santander, Arthur Hanlon, Rio Roma, Wise The Gold Pen and Luis Carlos Monroy. Held on April 24, 2013 at the JW Marriott Marquis in Miami and moderated by Delia Orjuela, BMI Vice President, Latin Writer/Publisher Relations, the annual event served as a platform for acclaimed BMI members to discuss the process of writing, producing and performing hit songs. This year, as in past ones, the panelists brought their distinct musical sensibilities and offered expertise and insight into their creations.

Colombian songwriter, producer, arranger and musician Kike Santander, who received the President’s Award at the 2011 BMI Latin Music Awards for his immense contributions to Latin music, presented video clips for three songs he wrote (“Si Tu Supieras,” performed by Alejandro Fernandez, “Abriendo Puertas” by Gloria Estefan and David Bisbal’s “Ave Maria”) and then elaborated on the inspiration behind them. Piano virtuoso Arthur Hanlon, an Irish-American born in Detroit who found a niche in Latin music, discussed his work as a songwriter, composer and arranger on “Ya Te Olvide,” a track he performed as a duet with Ricardo Montaner on his own 2009 album, Piano Sin Fronteras. Mexican duo Rio Roma sang three songs (“Todo Cambio,” which they wrote for Camila, “Dia de Suerte,” written for Alejandra Guzman and “Me Cambiaste La Vida,” their own hit from 2012). The brothers – Jose Luis and Raul Ortega Roma – then talked about the creative process behind each of those three songs.

In addition, renowned Mexican singer-songwriter Luis Carlos Monroy talked about penning hits for the likes of La Original Banda el Limon (“El Mejor Perfume,” for which he received a 2013 BMI Latin Music Award) and Cristian Castro (“Te Amare Mas Alla ”) and offered his own live interpretation of those songs. Recent BMI signee Wise The Gold Pen, who has established himself as a go-to hitmaker in the pop, urban and tropical genres of Latin music, discussed what it was like to collaborate with artists as diverse as Fanny Lu (“Ni Loca”) and Tony Dize (“El Doctorado”).