Posted in MusicWorld on November 30, 2022 by Dave Simons 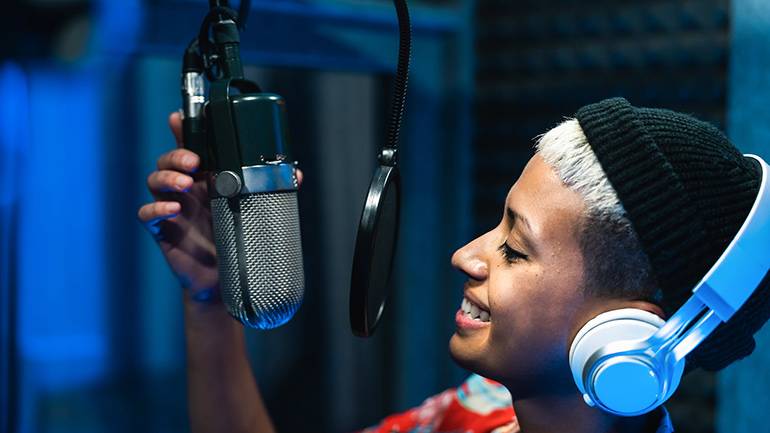 Like most of my engineering peers, early on I endeavored to fill my home studio with as many different types of microphones as my budget would allow, from lovely old Sennheisers to the more workmanlike family of Shure dynamics. Eventually my insatiable appetite for guitars meant selling off many of these beauties, but by then I’d concluded that you really don’t need more than a few choice mics unless you’re regularly recording a gang of people.

Lately I’ve taken to using a single microphone for just about everything: a large-diaphragm condenser RODE NT2-A, one of several well-built, affordable models from the reputable Australian mic maker. I keep mine fixed atop a rolling boom stand, with a good run of cable out to the recorder. When it comes time to overdub, I set up the instruments in a semi-circle—keyboard, acoustic guitar, bass amp, percussion—and then one by one I simply roll the RODE over to each instrument or cabinet, adjust the boom extension, set the levels and go. While one might use a dynamic mic up close for the amplifier or perhaps direct-connect the bass, in reality a single condenser can do just about anything.

For one thing, there’s nothing quite like the sound of a good condenser microphone. Listen to any great vocal recording from the last 60 years, and chances are there was a condenser on the premises, from the stately old Neumann U47 (and its successors the U67 and solid-state U87) to AKG’s popular 414 model and many others in between. Whereas dynamic microphones typically have a narrower range and flatter frequency response, the bigger capsule inside a condenser mic delivers a much wider spectrum of tonality. And while dynamics can only detect signals that are directly out front, condenser capsules are active on both sides, allowing you to capture 360 degrees of sound if you so choose.

Condensers are also much more sensitive than dynamics, and therefore can be placed a good distance from the source without sacrificing detail. Accordingly, condensers excel at recording background vocals, strings or horn sections, or for just adding some natural ambience. Conversely, large-diaphragm condensers are equally effective when used up-close. During the 1940s, singer Bing Crosby found that by standing only a few inches from the microphone’s grille, the vocal sound was noticeably rounder than if situated several feet away. The so-called “proximity effect” was a game changer for vocal recording, as it allowed singers to perform with less volume and greater intimacy.

As noted above, condensers are also exceptionally versatile. There’s hardly an application that a condenser mic can’t handle—in addition to lead and backing vocals, condensers can be placed in front of instrument cabs, inside pianos, or aimed at the 12th fret of an acoustic guitar for a woody tone few other mics can match. Both large- and small-diaphragm condensers are also frequently used for recording drum kits, either as overheads or for spot-miking individual drums such as snare, floor tom-toms and even bass drum.

Key to this adaptability are several function switches built right into the microphone for selecting different polar patterns (cardioid, omni, or figure-of-eight), adjusting equalization, and reducing the amount of signal the mic is exposed to by up to -20dB (using the on-board “pad” control). The latter feature is particularly handy when working with louder instruments such as drums, bass or electric guitar. Experimenting with various combinations of gain, EQ and pickup control is half the fun—when recording vocals, for instance, you could try one take with the mic set to the standard cardioid position (only one side live), then switch to omni for a second take (both sides live) in order to add a bit of room sound to the mix.

Now the fine print: in addition to being somewhat pricier, condenser mics are also more fragile. Should you accidentally drop one, the wafer-thin capsule responsible for all those luscious tones could be rendered dead on the spot. Condensers also require a dedicated power source (typically 48 volts), and great care must be taken to ensure the mic is plugged in before turning on the juice, or you’re liable to fry the innards.

That said, if you’re in the market for a single microphone that can cover nearly all of your tracking requirements while offering pro-level sound, a good condenser is the way to go. Don’t be surprised if it turns out to be practically the only recording mic you’ll ever need.