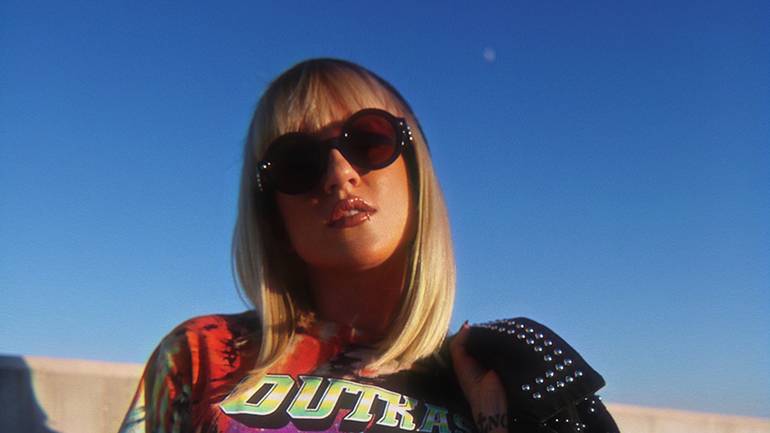 It’s been a wild ride for Sam Bruno. While currently renowned for her sultry, hip-hop-inflected electronic dance pop, the Arizona native started off singing in church, honing her burgeoning musical skills on piano and ukulele. Taking her musical abilities and songwriting chops to the next stage, Bruno built herself a home studio in 2010 and started collaborating with Phoenix-based producer Lifted. In 2011, a crucial meeting with superstar rapper Kanye West gave them their big break, resulting in the song “The One” from Kanye’s 2021 compilation, G.O.O.D. Music: Cruel Summer. From there, Bruno’s ascent continued, leading to a string of collaborations and acclaimed singles such as “Search Party,” “Colors,” “Tip of My Tongue,” “Hello Hater” and a debut EP in 2017, I Am Sam. BMI recently caught up with Bruno on the eve of the release of her second ep, FEMO. Here’s what she had to say.

Sam, thanks so much for metaphorically sitting down with us! You’ve had quite the career up until now and there’s a lot we’d like to touch on. To start, what is your earliest memory of music? What planted the seeds and made you realize this is what you wanted to do?

Thank you for having me, you know I love my BMI fam. My earlier memories of music were growing up in Arizona around my grandma Kathy who was a brilliant singer, pianist and composer. In the fifties, she sang baritone in a barbershop quartet called the Copper Bells who toured all over and won several international awards. When I was a little girl, she would have me sit next to her on the piano bench and teach me songs we could play together. Also, I remember driving around with my dad while he listened to classic rock n’ roll… bands like Fleetwood Mac, and I just remember absorbing the melodies and memorizing the lyrics.

Your early demos found their way to Kanye West which led to you writing and playing the piano on a song called “The One” featured on a compilation album of his. From our understanding that was your first writing credit, right? That’s a huge deal! Can you expand on how that came about and what the process was like?

Yes! You know how life has those magical moments where the stars just align to put you on your path? That’s what this was. My good producer friend, who I wrote all those early demos with, ended up meeting up with Kanye on one of his trips to L.A. During that meeting, Kanye was impressed with what he heard, so he flew my friend to London for a G.O.O.D. Music writing camp. When my friend got there, he played some of our demos we made together and Kanye asked, “Who is that girl?” My friend said, “This dope writer and artist named Sam Bruno from Arizona.” A couple hours later, Kanye was like, “Get that pop girl out here with the dope melodies!” And just like that, I was on a plane to London within twelve hours to write with some of my biggest music heroes. I didn’t fully know what I was doing, I just showed up with my creativity and some great advice my mentor Bishop gave me right before hopping on the plane: “Sam, you’re about to enter a new level in life. Remember - new levels, new devils. Watch out for anything trying to distract you from the goal while you’re there.” I listened to him and stayed focused on the music and from it I landed my first placement with Kanye West, 2 Chainz, Big Sean, Marsha Ambrosius and James Fauntleroy.

You’ve written and produced for some legendary artists including Lady Gaga, Nicki Minaj, Britney Spears, and Eminem, to name a few. You also worked on the song “Famous” by Lil Wayne, featured on his 2018 album Tha Carter V. What was your reaction when you heard the news that it went platinum and went #1 on the Billboard 200 chart?

Working with any of my childhood icons has really been a full circle, beautiful experience for me. When you go from listening to these superstar artists on a little portable cd player as a kid to vocal producing them in the studio while they’re in the booth singing the lyrics that you wrote, it’s really such a trip. Like with “Famous,” I played the piano, produced and wrote the hook when I was in a really depressed space and it’s like it just flowed out of me. The lyrics, “All the lighters in the sky, you must be famous,” really lifted me up from the place I was in and gave me a little glimmer of light to continue on. Then, years later when it came out on Lil Wayne’s album, it just reminded me that real, good music never dies and there must be a timeless quality to the music I create. I just gotta keep going and always be patient and trust the process. Tha Carter V going platinum was a sweet cherry on top because “Famous” became the first song I wrote and produced to go platinum.

Obviously, the pandemic has made it tough to be productive at times, but you’ve been absolutely crushing it over the last year or so. The most notable achievement is your first #1 as an artist on the Billboard Dance charts with “Lonely Heart” back in February of this year. Congrats! What’s your secret for making the most of the pandemic?

Thank you! Pushing myself to keep showing up and creating even if I don’t “feel” inspired has been a big key for me. A lot of the time getting started is what sparks the inspiration. Also, listening to my body, because at times I have been absolutely exhausted and just needed to take a little time to take care of me to fill myself back up. It’s all about balance. Which I’m still always working on.

A lot of the music you focus on is electronic, hip-hop, and pop. Do you have a favorite genre you gravitate more to? Or is it a mash-up of all those things?

Definitely a big, fat mashup. I listen to everything from Lo-Fi to Country and everything in between. And when I’m making music, I love blurring genre lines and making different genres have dope little mixed-genre babies.

From afar, it’s been amazing to watch you be so successful as an artist, songwriter, producer, recording engineer, etc. Given some reflection, what was the hardest discipline for you to learn? What was your biggest motivation to learn all of these roles?

Thank you so much. The hardest discipline to learn which I am still learning is balance. Balancing all of my roles with as much care, attention and focus as the rest. Knowing when it’s time to wear what hat and then wearing that hat well. The biggest motivation to learn all of these roles is just the real, raw, pure love for music that I have. It’s always been natural for me my whole life to write songs, harmonize, play piano and express myself musically. But to develop these skills as a professional, it’s the love I have for it that keeps me going and pushes me to keep getting better and continuously elevate myself.

You’re about to release your sophomore EP, FEMO. Tell us more about that body of work and what we can expect from it. Do you have a specific track on it that means the most to you?

FEMO!!! It means Female - Emo. A title, concept, and body of work that I am extremely proud of. It’s a project that shares a different side of me as an artist than anything I’ve put out before. I tap into the pain I’ve been through, emotional lyrics, beautiful soundscapes, and a lot of hip-hop elements in the production. It’s a big moody vibe. I share my journey of losing it all and then using my loss to grow into a stronger, wiser, and even better version of myself. I think people can relate to this feeling of hopelessness when going through something difficult in life but then getting through it and seeing the beauty that grew from it. Every single track on it means the most to me, so you’ll just have to listen to all of them and decide for yourself. I already dropped two singles from it and the third single and the full EP is coming soon!

Lastly, what is the best advice you can give to aspiring artists, songwriters, and producers that you’ve received?

My mentor Bishop taught me that if you decide to do this and really go for it, to make longevity your goal. Don’t be in a rush to blow up because you can and usually do fade away just as fast. If you’re going to be in it for the long run, you gotta learn what it really takes to master your craft and then put the work in. It will take resilience, discipline, adaptability and will require so so much of you. But the reward… is great!