Posted in MusicWorld on October 18, 2017 by Dana Rodriguez 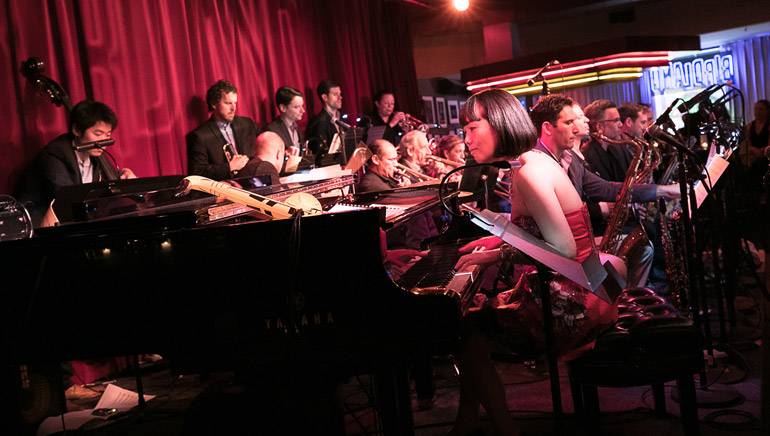 Colorful. That’s the most accurate description for award-winning BMI jazz composer Migiwa “Miggy” Miyajima. From her music to her personality to the title of her new album, the word “colorful” says it all.

The two-time GRAMMY nominee and BMI Jazz Composers Workshop alumna is quickly rising to fame in the jazz world in the U.S. and Japan, enjoying success leading big bands on both sides of the Pacific, including her own 17-piece Miggy Augmented Jazz Orchestra. The self-taught composer, pianist, bandleader, producer, educator and lecturer – who is the legendary Vanguard Jazz Orchestra’s first Japanese representative and one of only a few jazz composers actively working in Japan – is also dedicated to promoting music education and international exchange between the two countries.

Currently in the studio recording her U.S. debut, Miyajima took time out of her busy schedule to tell us her unique story.

You recently performed at New York’s famed Birdland Jazz Club with your Miggy Augmented Jazz Orchestra. What was it like for you to be the first Japanese woman big band leader to take the stage there since Toshiko Akiyoshi in 2003?

It’s so hard to put into words. When they told me I would be performing at Birdland, I couldn’t sleep for two days after that. Toshiko is not only a jazz legend, but she also opened the door for so many Asian and Japanese women. She started so many new things here and I was always hearing about her. And even after being here in New York for more than five years now, it still feels new and I’m still having some difficulties trying to get used to such a different culture. I can’t even imagine how hard it was for her when she started. I feel really honored to follow in Toshiko’s footsteps.

What do you think are some of the biggest differences between male and female composers in a male-dominated genre like jazz?

Yes, it is definitely male-dominated! I was lucky to work with a lot of male musicians in Japan as a bandleader there for over 10 years, so it helped me to better manage things here. The biggest difference is how we run the band. During recording sessions, for example, I can tell when someone is really tired or really hungry. Knowing that kind of “small” information helps me to get everyone to feel more comfortable and be happy to be playing together. And that kind of thinking really affects the music. Musically, I don’t think there’s any difference between my music and a male composer’s music.

What is the inspiration behind Colorful, your U.S. debut album, which you are currently in the studio recording?

I don’t want to sound too political, but after your recent presidential election, I started thinking about myself as being a minority and a woman, and also if I was going to stay here or if I should go back to Japan. But I always thought it was so special to be here as a minority, unlike in Japan where everyone is the same [laughs], so I decided to stay. I realized that maybe I could encourage other minorities and women by doing things like playing at Birdland, for example; that’s what colorful means to me. I think this country is beautiful because it’s so colorful. So, that’s the title. I wanted to make sure that my band was colorful, too, so we have members from all over. There are a few female members, some young members and some members in their 60s. One of the songs on the CD is also titled “Colorful,” and everyone has a solo in that piece. They all sound very different and it gives the piece a cool and colorful vibe. That’s the message I want to send out to the world with this album and song.

What is your process for composing new music?

One thing I always make sure to do is include a story or a message in my music, like the message in “Colorful.” I find inspiration in the everyday things that I see in my life, like the tree in my yard. There are always so many birds in that tree and I hear them singing all the time. I can picture the story in my mind, like a movie, where I’m dancing with the birds and I’m dancing because of the birds, and I can just come up with the chords like that.

How did the BMI Jazz Composers Workshop help your career?

That was everything for me; it changed my life really. I am self-taught. I never went to school for music, so the BMI Jazz Composers Workshop was the first formal music training I’d ever had. I really wanted to learn more, so I came to New York in 2012, after receiving a scholarship from the Japanese government and joined the Workshop. I was 38 at the time. I studied with Jim McNeely and Mike Holobar for three years and met so many composer friends. It was very special. I think it’s really great that after 30 years, the Workshop is still bringing composers together from all over the world to exchange ideas and opinions. My hope is that other people can have the same life-changing experience that I did.

What is it like working with the renowned Vanguard Jazz Orchestra and being nominated for two GRAMMYS as the band’s associate producer?

It’s really like beyond any words I can think of. The Vanguard Jazz Orchestra is one of the first big bands I ever heard when I was 19. I started working with them in 2008, and in 2009, I volunteered to coordinate the band’s Japanese tour – the first one in 20 years. The following year, they made me an official representative of the orchestra and I couldn’t believe it! So now every year, I produce the group’s tour and workshops in Japan. At that time, I also started working as the associate producer on their recordings, and yeah, two of those CDs were nominated for GRAMMYS [in 2011 and 2014]. It’s still like a dream.

You decided to pursue music professionally in 2004 at the age of 30 after working several desk jobs after college, but at what age did you start playing the piano and writing music?

I started playing piano when I was three years old, and when I was six, I wrote my first composition, but I had no idea I was composing music! The piece was called “Circus.” I went to the circus with my friends and when I got home, I ran right to the piano and just started playing. But I stopped playing when I was 18. Eventually, I started to forget my musical instincts and how much I loved music. There is no such thing as having two majors in Japan, and it’s expected that you will get a “normal” job at a good company after school. So, after graduating from Sophia University in Tokyo, I worked in advertising, in IT and as an editor for a travel magazine. But my passion for music eventually led me back to it.

What’s the story behind your passion for education and promoting music relations between the U.S. and Japan?

There are so many jazz fans in Japan – one student big band contest drew almost 10,000 people from all over the country – but there aren’t really any opportunities to learn it in school. I wanted to learn more myself and to bring American jazz to Japan. For a long time, I went back and forth between the two countries, but it got too expensive. That’s why I moved to New York. And then after being named the Japanese representative for the Vanguard Jazz Orchestra, I started coordinating workshops and lectures and other educational activities in Japan. People in their teens to their 60s who attended the workshops were telling me, “This is life-changing.” That was amazing to me and I cried after hearing that.

What do you see as the greatest achievement of your career so far?

I would say it’s my work with the Vanguard Jazz Orchestra, helping change the lives of young Japanese musicians who want to fulfill their music dreams like I did. I want to keep opening doors for females and other minorities like Toshiko did for me and so many others.

Who would be your dream collaborator and why?

I love to collaborate with people from different genres and I would love to work with some of music’s biggest pop superstars. I’m listening to Stevie Wonder a lot right now, so he would be really great to collaborate with. I feel like jazz is often viewed as “difficult” music, but it started as dance music really and can actually be very pop-sounding and hip. I want to make music that is easy for people to understand and digest.

What is your favorite piece of music that you have ever written, performed or produced?

[Laughing] Oh, I can only pick one? I would have to say “Forever Lasting.” It’s a piece by the Vanguard Jazz Orchestra, written by Thad Jones, one of the orchestra’s founding members. The song was included in a live concert recording we did in Tokyo in 2010, right before there was a big earthquake in Japan. The band’s leaders, John Mosca and Douglas Purviance, decided to release the concert as a CD [the GRAMMY-nominated Forever Lasting – Live in Tokyo] for the Japanese people after the earthquake and it became a very important piece in my life. But I have a feeling “Colorful” from my upcoming album will also be an important piece for me, too, because of the song’s message.

Which non-jazz artists are on your playlist?

Hmmm, only non-jazz artists? Well like I said, I am listening to Steve Wonder a lot. And I love Michael Jackson. I also listen to classical music like Bach and Pierre-Laurent Aimard – he’s a classical pianist. I like pop artists like Justin Timberlake and Bruno Mars, too.