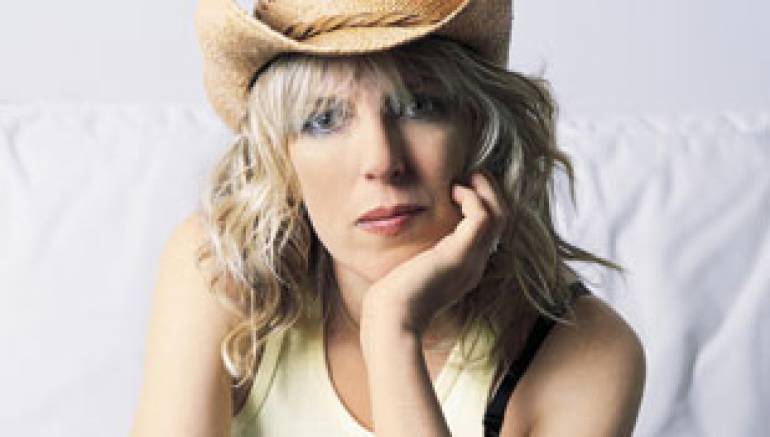 For someone who admits to being deliberate about her work, Lucinda Williams is on something of a roll. Since releasing 1998’s Grammy winning Car Wheels on a Gravel Road, the veteran artist has churned out three albums that have solidified her reputation as one of America’s finest singer-songwriters. Her latest, the 2- CD set Live @ the Fillmore, captures Williams and her band at the height of their powers as they unfurl fiery performances of much of her recent catalog. A few days before she was scheduled to begin working on a new studio album, Williams spoke with Performing Songwriter about the live album, songwriting and what her father-the renowned poet Miller Williams-has passed on to her.

What figured into your decision to make a live album at this particular point in time?

I just felt ready, with this band. That’s kind of a simple response to the question, but it just felt like a “right place at the right time” kind of thing. A lot of people had talked to me before about doing this-they would say, “Oh, you should do a live album” - but I just felt more confident this time around. I’ve played with some great players [in the past], but this is the first time I really felt like everything was together, and felt comfortable with the band as a whole. We’ve been working together for a few years now, so there’s that chemistry and also the shows were going so well. You kind of know when it’s the right time.

Did you have any sort of template in mind for the album?

Well, I did. The other reason I haven’t done live albums, to be honest, is because I’ve never really liked live albums that much. A lot of times the recording isn’t that great, and it’s usually the same songs that you fi nd on the studio album anyway. I never saw much point in it, other than that it might be interesting for some of the fans as a collectible thing rather than an artistic development. There are a few exceptions, of course - the Allman Brothers Band’s At Fillmore East, and some of the Stones’ live albums. My main concern was that it sounded really good, and that there not be too much in-between rambling and chattering. Those things are fine when you’re at the show - they work when you’re there - but when it comes to translating the show to a disc, I didn’t want that. And I was concerned that it offered people something artistically with the songs that you might not hear on the studio album.

It’s clear on the live album that your voice is becoming more versatile, and has taken on a sort of lived-in quality. Is that something you’ve been striving toward?

Not really, but I do agree. I feel more confident with my voice now than I ever have. I think it’s just a gradual process of having been doing it for so long. I think a lot of it is age and maturity. That’s probably what I will take with me from making the live album-added confidence in myself as an artist and in what I’m capable of, and confidence in us as a band, in the quality of what we as a band are capable of. I think we all gained something from hearing ourselves live. It’s kind of a scary process, because you don’t really know if you’re cutting it.

You’ve said before that when you were making the World Without Tears album, you were thinking a bit about Neil Young and Crazy Horse. The live album seems to be an extension of that approach.

Yeah. I’ve always used them as a template. I’ve talked about that in the past, in terms of the way I wanted to approach playing my songs live. I’ve always loved Neil Young and Crazy Horse because of their ability to deliver the song in a professional manner - with a beautifully musical, artistic delivery - and yet at the same time appear kind of loose. Th e chemistry is together, and the vibe, and it’s all connecting and everybody’s playing the right notes, but at the same time it’s loose and relaxed, especially in the rhythm section. I’ve always tried to achieve that over the years, and feel like I finally have, with this band.

Well, that’s always changing, depending on what’s going on in my life. I wouldn’t say it’s any different today. I describe it as a well, where I kind of dig into the well and pull stuff out to write about. Whatever’s going on in my life, or whatever has gone on in my life, I just sort of file it away until I feel like writing. There’s a pattern I’ve developed where I’ll go through spurts where I churn out songs. I’m going through one of those periods right now. Usually it’s stuff that builds up in my head, where I’ve been thinking about it a while. Occasionally it might be something that happened yesterday-where I’ll write about it the following day - but usually it’s not like that. It’s sort of a cumulative process. For instance, right now I’m dealing with the death of my mother, which happened in March of last year. I’m writing about that, but something like that might take a year before I actually get the songs written.

That’s the easiest stuff to write about. I think most songwriters would agree that unrequited love is the easiest subject to write about. Th ere’s something about the fantasy aspect of the subject matter. A big part of songwriting, for me, is fantasizing. It’s almost a dreamlike state that I go into when I’m writing. I’m imagining things, and wondering about things? maybe fantasizing about a person, about being with someone or not being with someone. It’s kind of built around that. Even in the case of something that actually happened, you still have to create a kind of story around that. That’s what a story is - it’s imagination and fantasy and wonder, all those things.

Was there a point where something clicked that made you feel confidence in yourself as a songwriter?

It’s hard to answer that question. I don’t know that there was a particular day or anything like that. I think that’s been a gradual process. It’s just a matter of having done it for so long. I started about 35 years ago. I started playing the guitar when I was 12, in 1965, and I remember writing my earliest song when I was 13. I guess the closest I could come to a specific time period, for that, would be when I had the songs all done for the self-titled album that came out on Rough Trade. And then I won a Grammy for country song of the year, which is a pretty big deal. That helps.

What qualities has your father passed on to you that have meant the most, artistically or otherwise?

I think the main things are his passion and his compassion - his passion for his art, and his compassion for other people. And the subjects that he writes about. The subject matter goes across the board, from a cat sitting in the window to a wreck on the highway. I admire his imagination and his ability to take everyday things and turn them into beautiful works of art. As far as the actual writing goes, I admire the economy of his words. I’ve had other people tell me I have that in my writing. I think he handed that down to me, how to say a lot in an economical way. And of course he really drilled into me the lesson about not overusing clichés, or relying too much on overused phrases.

Did coming of age in the ‘60s - which was a great time to come of age, as far as rock ‘n’ roll goes - does that figure into the way you mix styles, or the fact that you don’t concern yourself much with genres?

Absolutely. The music I grew up listening to was so diverse. And then, the particular artists I listened to were also very diverse. I always use Buffalo Springfield as a good example of that. They really crossed a lot of musical genres. Bob Dylan, of course, did the same thing, going between country, folk, folk-rock and blues. His music encompassed all those things. And even artists like Judy Collins, who was an early folk influence back in the mid ‘60s. She embraced a lot of different styles of music after starting out doing the more traditional folk thing. My favorite album of hers is Wildflowers. She’s got a Jacques Brel song on there with a lot of orchestration, and she does Leonard Cohen stuff. She kind of mixes it up. Those artists were all artists unto themselves. They created a persona. The Band did that, too.

When I first started out I was doing a lot of covers, of course, until I developed my songwriting more. That’s how I learned - by doing other people’s songs. If you had come to see me play back in the early ‘70s, you might’ve heard me do a Hank Williams song, a Robert Johnson song, and I might do “Triad,” the song I learned from Jefferson Airplane that David Crosby wrote. I might do the Jimi Hendrix song “Angel,” J.J. Cale, Jesse Winchester, Dylan, Cream? I didn’t care. It didn’t occur to me that I couldn’t do a Cream song just because they’re a rock band and I’m a folk singer.

John Hammond, Jr. once said that the blues tradition is mostly about borrowing and lending. Do you tend to see things that way?

Yeah, I’ve always viewed things that way. I’ve always hated that term “ripping off.” I’ve never agreed with that notion that some artists rip things off from other artists. I look at it as moving from one generation to the next.