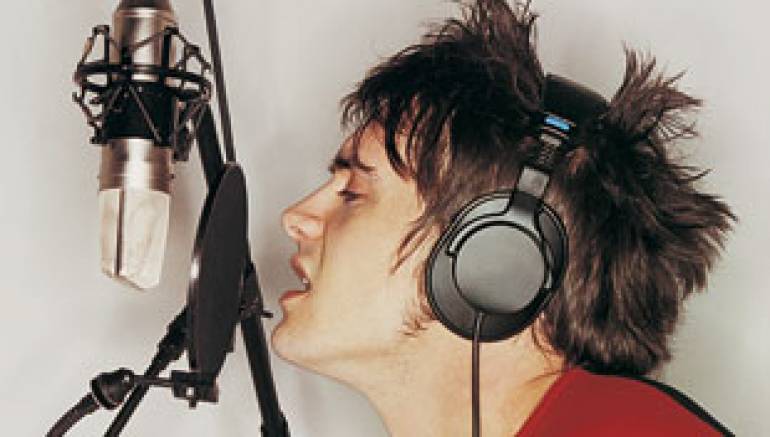 I’ve never really liked recording my vocals. Maybe it’s my voice, or knowing that once the vocal is on there the finished track might not sound nearly as great as I’d previously thought, or any number of other reasons - which might explain the amount of vocal-less backing tracks currently on my hard drive. Unfortunately, it really doesn’t matter how good your rhythm tracks are if you don’t have a vocal that can do it justice.

However, there are a handful of strategies that can help alleviate the tension and tedium of vocal recording while greatly improving the sound of the finished product. Consider trying a few of these vox enhancers for your next set of demos.

Cut it quick. For starters, go for spontaneity - try to record your vocal in as few takes as possible while the energy level is still fresh. Many artists insist on cutting their parts in one go, then simply patch over any slight imperfections later on.

Mix & match mics. Generally speaking, large-diaphragm condensers are the microphone of choice for vocal recording, since they’re capable of providing the greatest amount of warmth and bottom. However, some engineers prefer dynamic mics with more mid-range response (such as the famed Electro-Voice RE20 or the basic Shure SM58). And it’s not always about the sound, either: A simple hand-held dynamic microphone can be much less intimidating for certain singers, since it allows them to feel like they’re performing in a room rather than working in a studio.

Make room. Most of us don’t have the luxury of owning a big space for recording, but with a little ingenuity, you can make it sound as if you do. After you’ve completed your vocal track, set up a PA speaker (or any other speaker, or even an amp) in the middle of your recording area, then patch the speaker into one of the outputs of your mixer. Hang a room mic several feet back from the speaker. Now run your vocal through the speaker and record the sound to a separate track. Once complete, mix the original “dry” vocal track with the “PA’d” part, adjusting the balance depending on how much extra ambience is desired. You can also put the speaker or amp in a concrete basement, in a tiled shower stall or any other reflective space for some real live reverb.

Cut it up. Here’s a good way to sharpen your digital editing skills: Record several different vocal takes one after the other, then cobble the “best” sections together (verse one from Take One, a chorus from Take Three, etc) by copying and pasting each passage onto a “master” final take.

Move around. If you use a laptop, DAW or similar device, take advantage of your recorder’s portability by cutting your vocals in different parts of the house, since each room can have its own particular acoustic nuance (and don’t forget about that tiled shower stall).

Cut it live. Though we’re inclined to record lead vocals as an overdub, if you’re working with a group of players, why not cut the part live during the actual take? Don’t assume you need big baffling, either - while some isolation may be necessary to prevent louder instruments from bleeding into the mic, in general a modicum of leakage will add excitement and lend a nice vibe to the entire track.

Watch the EQ. Don’t ruin a good vocal take by over-doing it with equalization. Brighten only when necessary - too much top will result in an ear-piercing shrillness.

Double it digitally. Double-tracking vocals is a tried-and-true technique, but if you’re not into singing the same thing twice, try this: Copy your recorded lead vocal onto a separate track, then, using the time parameter on your recorder’s tools menu, offset the copied track ever so slightly (by just a few milliseconds). Pan each part hard left and hard right. Though the copied part is identical, the slight delay will give the impression of two separate takes.

Fuzz vox. Tired of the same slick vocal sound? Record your vocal through a distortion box for some nice authentic edge. To do this, you’ll need an XLR-to-1/4” mic cable to adjust for the impedance difference. For that matter, you can plug into almost any kind of effects box you have on hand - compressor, chorus, tremolo, etc. (results may vary, of course).

Process with the performance. Try adding effects like echo or delay while you’re tracking your vocals, since hearing the effect during the take can help shape your performance. John Lennon, for instance, used to love having delay in his headphones that he could use as a rhythmic device. In fact, many old-school engineers still prefer processing during the performance, rather than dumping everything on after the fact. After all, what you’re hearing during the take is what you’re getting as your final sound-and there’s nothing wrong with that.