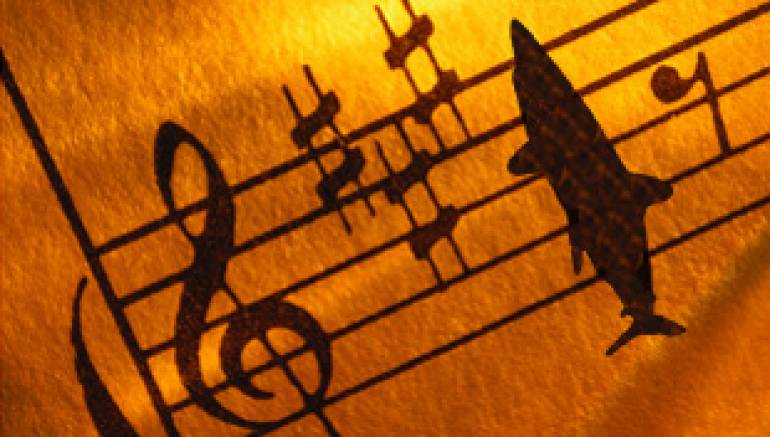 While we all thrilled to the 1975 blockbuster Jaws (and, perhaps, at least tolerated its several sequels), and enjoyed some laughs at Chevy Chase’s “Land Shark” routine on “Saturday Night Live,” there remains another insidious creature prowling the songwriting waters that’s neither thrilling nor amusing.

Watch out for the song shark.

One of the more aptly named phenomena in the music business, the song shark can be every bit as voracious and omnivorous as its aquatic namesake. The term refers to a person or company who solicits material from amateur songwriters with the promise of selling it to a music publisher, record company, or recording artist.

Song not finished? No problem! The song shark also has a capable staff just itching to add music or lyrics to an unfinished composition to achieve a finished, sellable song for which music publishers will go into a feeding frenzy to outbid each other.

Oh, and did we mention that they charge a fee for this amazing service?

The song shark uses a variety of means to troll for unsuspecting songwriters. Often he will advertise his services in publications likely to be read by amateur songwriters, or purchase a list of copyright entries from the U.S. Copyright Office in Washington, D.C., which provides the names and addresses of everyone who has registered a musical composition. A direct-mail campaign soon follows.

While some song sharks are nothing more than scam artists, running similar swindles on people in almost any profession, many do have a legitimate background in the music business, and may even be published songwriters. That fact, coupled with a company name that often includes official-sounding words like “guild,” “bureau” or “federation,” can give the enterprise a whiff of authenticity.

But remember: The root of “con artist” comes from the word “confidence,” in that the songwriter’s confidence is the first thing the shark must obtain. (The second, of course, is his money.) The idea that, for a nominal fee (sometimes as little as $5-10), the “Composition Service Company of America” will combine your lyrics with an original melody and then easily peddle the result to publishers, record companies and radio stations for big bucks and the beginning of a successful career may sound ludicrous ? and it is.

The fact remains that there is no reputable “middle man” company submitting songs to publishers for a fee. Likewise, reputable music publishers do not take out advertisements or indulge in direct-mail campaigns to solicit material; on the contrary, they are constantly being deluged with new material, obviating the need for seeking out additional songs in such a manner. In addition, reputable publishers will not conduct business with song sharks; in fact, they are actively trying to educate the public about the practice.

As for the sharks themselves, their annual income is difficult to estimate; like recorded-music pirates, their balance sheets aren’t exactly open for public inspection. However, when one figures in the additional fees that are regularly charged in addition to the nominal “administration” charge—for such items as orchestrations, music copying, even recording—it seems likely that we’re talking hundreds of thousands (and perhaps millions) of dollars.

That said, separating a song shark from a legitimate company may not be easy. In addition to the bona fide accomplishments mentioned above, the shark will usually provide an impressive-looking contract guaranteeing an even more impressive-looking set of services. (The shark’s professed enthusiasm for your composition and/or general talent can count for a lot, too.) That contract is usually worded in such a way as to not be in strict violation of any laws—though of course that doesn’t make it 100% legitimate either.

The simple rule of thumb when dealing with a company of this kind is: If they’re asking for money up front to place your song, they are probably song sharks. If, however, you are still not sure, you can contact your performing rights organization or the Songwriters Guild of America for more information.