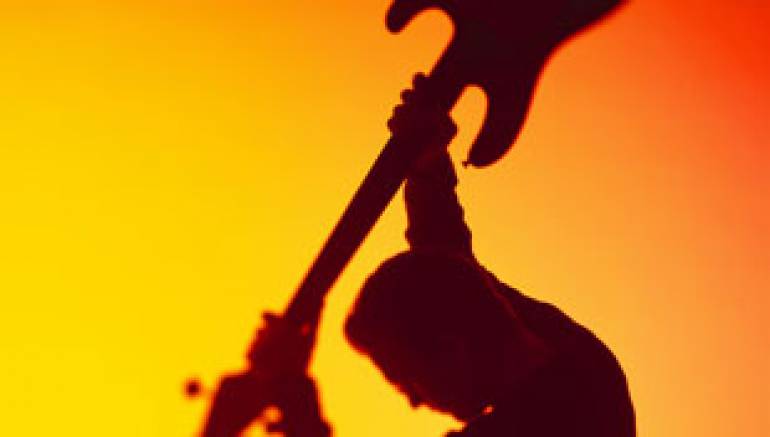 Back in the old days, it wasn’t uncommon for extemporaneous noises to turn up in the middle of a recording session - uncontrolled feedback, unexplained distortion, instruments wandering onto the wrong microphone, and so forth. Why, there were even these hoodlums like the Beatles and the Stones who had the audacity to purposely mess with the system. Imagine!

Naturally, digital technology was created in part to prevent such “irregularities” from occurring on a regular basis. In fact, they did such a good job of fixing the flaws that they forgot one thing: Some of the best moments in pop music were the result of unintentional noise-making, intentional rule-breaking, or both.

The following are a few notable examples of accidental emissions and creative lunacy in pop music. While you may not find any of these “techniques” listed in an audio textbook, one thing’s for sure: None of these tracks would have turned out quite the same had they been recorded under “normal” circumstances. Something to think about the next time you’re struggling to complete that blemish-free demo.

Wrong way, right sound: In 1973, engineer Jeffrey Lesser was overseeing the session for Kool & the Gang’s soon-to-be first pop smash, “Funky Stuff.” Setting up the mics that evening was Lesser’s assistant engineer, an up-and-comer by the name of Bob Clearmountain. “The main groove of the song was accentuated by this big, open floor-tom beat,” says Lesser. “We got this fantastic take of the song, and afterwards I really wanted to highlight the sound of that floor tom. So I’m bringing it up and up in the mix, but no matter what I did it still sounded too room-y and I couldn’t get it focused. The thing is, the band loved it, they kept saying, ‘How did you do that? It sounds great!’ So I went out to check a few things, and there was that floor-tom mic - a Neumann U87 in cardioid position - with the live side facing the wrong way! On the one hand, I was totally embarrassed . . . but it was because we did it wrong that they ended up with that sound!”

Fine feedback: During the recording session for the Beatles’ 1964 hit “I Feel Fine,” John Lennon casually leaned his acoustic-electric Gibson guitar up against an amplifier, and moments later the instrument began to howl - fortuitously in the right key. The resourceful Beatles engineers later grafted the extraneous noise onto the song’s intro - and in the process created the first well-known example of recorded feedback.

When you talk about distortion: Four years later, Lennon (who by now had become practiced at the art of extemporaneous noise-making) was searching for the ultimate distorted guitar sound for his new song, “Revolution.” On a whim, Lennon hauled his Epiphone Casino into EMI’s Studio Three control room, plugged straight into the console and swung the needle all the way into the red. Three straight violations of EMI recording policy - and the result was the most ferocious-sounding record in the Beatles’ catalogue.

Gold start: While working at L.A.‘s famed Gold Star Studios in the early ‘60s, an eccentric young producer from New York named Phil Spector devised “the Wall of Sound,” a recording technique that would influence players and producers alike for generations to come. Ironically, Spector’s invention came about largely by accident. “We’d been working on [Bob B. Soxx & the Blue Jeans’ hit] “Zip-a-Dee-Doo-Dah” for something like three hours,” recalls Spector’s assistant, Gold Star engineer Larry Levine. “And the whole time, Phil kept boosting the levels, until it finally reached the point where everything was pinning. Because this was my first session with Phil, I really didn’t have the nerve to say anything to him at first. Finally I couldn’t take it anymore, so I just shut down all the mics at once. Phil accepted that graciously - he started screaming at me! I told him I had no option but to do that. So very slowly I stared bringing the mics back up one at a time, balancing them as I was going along. I got to the last microphone, which was on Billy Strange’s guitar, and Phil suddenly jumps up and says, “That’s it - that’s the sound - let’s record!” I told him I didn’t have the guitar mic up yet, but that was exactly what he wanted. So we went with it. That was the beginning of the Wall - the careful blending of the instruments, bringing things up gradually in the mix. It was the most incredible recording experience I’d ever had.”

Out of control: For the past decade, producer Matt Wallace has made one great-sounding record after another by steering clear of standard studio etiquette. A good example of Wallace at work is Paul Westerberg’s “Silver Naked Ladies,” from Westerberg’s acclaimed 1993 collection 14 Songs. “As soon as we’d agreed upon the best rhythm-track take, I could sense that Paul was in the spirit of the song and was ready to sing,” says Wallace. “Right there in the control room was a Neumann vocal mic on a tall boom stand, so I immediately rewound the tape, then swung the microphone to the listening position of the console, cranked the main monitor speakers to a very loud volume - i.e., no headphones - and got Paul to run down a couple of vocal passes. The assistant engineer said that it wasn’t possible to record a vocal in a control room with a very sensitive tube mic and the monitors set to stun. Well, guess what? It is possible! Even Paul was a bit shocked to be participating in a very freed-up approach to recording, where the performance took precedence over the technical aspects of recording. What you’re hearing is Paul, who is actually holding onto the U47 - another technical no-no - bending towards the mic and speakers, and letting it rip. What a f***ing inspired performance that was!”

Improvised slide: Luckily, there are a few studio pros out there today who still believe that spontaneity can result in a great record or two. Take Jon Brion, the L.A.-based multi-instrumentalist songwriter and session guitarist behind Aimee Mann, Fiona Apple and Rufus Wainwright, among others. In 1996, Brion was summoned by producer T. Bone Burnett to help patch together a set of Jakob Dylan songs during the making of the Wallflowers’ Bringing Down the Horse album. “I walked in and they played me the basic chords of ‘One Headlight,’ so I just plugged in and went at it,” recalls Brion. “When the solo came up, there happened to be a screwdriver sitting on top of the console, so I just reached over for it in the middle of the take and proceeded to play the solo with it - then put it down and finished the rest of the song! Which is kind of typical of the way I work. Later I realized that the intonation wasn’t quite there - and all I could think of was poor Ry Cooder driving around in his car and this song comes on the radio, and him screaming, ‘These goddamn kids - what is this crap?!’”

Horse sense: Some believed that the noticeably distorted vocal on the Rolling Stones’ “Wild Horses” - recorded at Alabama’s down-home Muscle Shoals Sound Studio - was Mick Jagger’s deliberate attempt to achieve a swampy Southern vibe. Not so, says the song’s engineer, Jimmy Johnson. “During that session we had a monitor speaker with a real distortion problem, but I convinced Mick that what he was hearing really wasn’t going onto the tape. Ironically, there was this other natural distortion caused by the old mic preamps in the console that really was going onto the tape! The thing is, in the end it kind of added to the overall ambience and gave the song real character. Mick obviously thought so, too.”

“Silence” treatment: In 1965, the Byrds took Bob Dylan’s “Mr. Tambourine Man,” added a rhythm section featuring Roger McGuinn’s distinctive 12-string electric Rickenbacker, and wound up with a Number One smash. Right away, Columbia Records attempted to repeat the formula by grafting a rock backing onto “The Sound of Silence,” an acoustic ballad by newcomers Simon & Garfunkel. Session guitarists Al Gorgoni and Vinnie Bell were tapped to give the song a Byrds-like feel. “Except we didn’t have a 12-string electric!” recalls Gorgoni. “So Vinnie and I just went at it together, and they mixed it onto the same track. The thing is, if you listen carefully, you’ll notice that the guitars aren’t even tuned properly - they’re just awful! On the other hand, all the things that are wrong with the recording didn’t stop it from becoming a huge success. So there you go.”