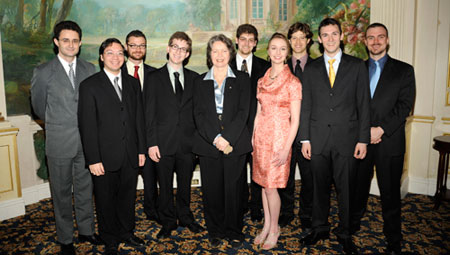 The BMI Student Composer Awards recognize superior creative talent; winners receive scholarship grants to be applied toward their musical education. In 2009, more than 500 manuscripts were submitted to the competition from throughout the Western Hemisphere, and all works were judged under pseudonyms. Cash awards totaled $20,000. Rafael Nassif was the named the winner of the William Schuman Prize, which is awarded to the score judged “most outstanding” in the competition. This special prize is given each year in memory of the late William Schuman, who served for 40 years as Chairman, then Chairman Emeritus, of the BMI Student Composer Awards. Additionally, the Carlos Surinach Prize, awarded to the youngest winner in the competition, went to Gabrielle Nina Haigh.

BMI has given 534 scholarship grants to young composers over the years, and many of the most prominent and active classical composers in the world today received their first recognition from the BMI Student Composer Awards. Eleven former winners have gone on to win the coveted Pulitzer Prize in Music. The BMI Student Composer Awards competition is co-sponsored by BMI and the BMI Foundation, Inc.

Evan Antonellis was born in 1984 in Hartford, Connecticut and currently resides in New York City. He received a B.M. degree summa cum laude in composition from the Boston Conservatory of Music in 2006 and a M.M. in composition in 2008 from Manhattan School of Music (MSM), where is currently pursuing a D.M.A. His composition teachers include Larry Bell, Elena Ruehr, Andy Vores, Dalit Warshaw, Reiko Fueting and Nils Vigeland. Antonellis is the recipient of the Lloyd Gelassen Fellowship Fund Scholarship for outstanding talent and academic achievement at MSM, the 2008 Nicholas Flagello Award for Compositional Excellence, and commissions have come from the Electronic Music Foundation and the MSM Percussion Ensemble. Recent performances include a premiere of his memory/fixed objects by William Lang and Andy Kozar at The Flea in New York City, his English Folk Songs performed by Matthias Vieweg and Reiko Fueting in Germany, and his memory/transient Beautiful by the MSM Orchestra. His BMI award-winning work was premiered in New York City by pianist Linda Wang.

Niccolo Athens was born in 1988 in San Antonio, Texas and now attends The Juilliard School where he is pursuing a B.M. degree in composition. His composition teachers include Timothy Kramer, Samuel Adler and George Tsontakis. Athens was the winner of the Carlos Surinach Prize in the 2006 BMI Student Composer Awards and was also winner of the first San Antonio Symphony Young Composer’s Competition in 2006. He was chosen recently as an “Emerging Composer” for the 2009 Staunton Music Festival and received “Honorable Mention” in the 2009 NYAE Young Composer’s Competition. His music has been performed by the San Antonio Symphony, the Olmos Ensemble in San Antonio, the Youth Orchestra of the San Antonio Philharmonic, at the Boston University Tanglewood Institute, the Aspen Music Festival and in New York City at the 5th Avenue Presbyterian Church, St. Steven’s Church and The Juilliard School. His BMI award-winning work was premiered in 2009 by the Juilliard Orchestra at Alice Tully Hall with Jefferey Milarsky conducting.

Brendan Faegre was born in Portland, Oregon in 1985 and received a B.A. in music from the University of Puget Sound in 2007. He is currently a M.M. degree candidate in composition a Indiana University (IU), where he is an Associate Instructor of Music Theory. His composition teachers include Claude Baker, Michael Gandolfi, Gregory Youtz and Robert Hutchinson and he has studied percussion with Amy Putnam, jazz drumming with Tim Rap and tabla with Pandit Ramdas Palsule. He has performed with the Tacoma Symphony, the Bellevue Philharmonic Orchestra and has served as the principal percussionist in the Puget Sound Orchestra and Wind Ensemble. Faegre’s work was chosen in the Juventas New Music Ensemble 2008 Call for Scores, and he is the recipient of the Delwen and Genevieve Jones Music Scholarship, the Old Town Music Scholarship, and the Puget Sound President’s Scholarship. He was awarded 1st place in the Beethoven Club 2009 Student Composition Contest for his “The Circular Ruins” which is scheduled for performance by the Luna Nova New Music Ensemble at the Belvedere Chamber Music Festival in Memphis, Tennessee. His music has been performed in Boston by the Juventas New Music Ensemble, at the 2006 SCI National Student Conference in Arizona, by the Puget Sound New Music Society, the Puget Sound Orchestra, and on several occasions at IU. His BMI award-winning work was premiered in 2008 by a student ensemble at IU.

Gabrielle Haigh was born in 1992 in Cleveland, Ohio and is a member of the 2009 graduating class at the Laurel School, an independent school in Shaker Heights, Ohio. She has not formally studied composition but she has taken piano lessons and worked on orchestration and theory exercises with her grandmother, Mary Ann Griebling, and with her mother, Margi Griebling-Haigh. She has studied cello with Kent Collier and voice with Marla Berg. She has been the soprano soloist with the Canton Symphony on two occasions and also with the Cleveland Baroque Orchestra and the Forest City Chorale. As a solo recitalist she recently presented a full recital to benefit the Cleveland Shakespeare Festival and a lecture recital of French music, with commentary in French. A Phi Beta Kappa Scholar and winner of a 2007 BMI Student Composer Award (Carlos Surinach Prize), Haigh is also the recipient of numerous composition honors, including awards from Music Teachers National Association, the National Federation of Music Clubs, the Ohio Federation of Music Clubs, the Akron Scholastic Composers Contest, and many others. Her music has been performed by the Laurel School Choir at the Eastman School of Music in Rochester and in New York City, the University of Northern Colorado Women’s Ensemble at the MTNA National Convention in Denver, the Cleveland Composers Guild, and the Cleveland Orchestra Children’s Chorus.

Andrew McManus was born in Bryn Mawr, Pennsylvania in 1985. He received a B.A. degree in music from Yale University in 2007 and will graduate in 2009 with a M.A. degree in composition from the Eastman School of Music. McManus, who plans to enter the University of Chicago Ph.D. program in Music composition in the fall of 2009, has studied composition with Allan Schindler, Robert Morris, Ricardo Zohn-Muldoon, Yehudi Wyner, Kathryn Alexander, Matthew Suttor, John Halle, Michael Klingbeil, Mark Dancigers, Michael Gandolfi and Peter Warsaw. Active as a violist, he has participated in many chamber and new music ensembles at Eastman and served as principal of the Yale Symphony Orchestra. He is the recipient of several Eastman School of Music awards, including the Howard Hanson Orchestral Prize, the Paul Sacher Scholarship, a Teaching Assistant Graduate Award, the Samuel Adler Scholarship, as well as several awards at Yale. His music has been performed recently at the Warren and Patricia Benson Forum on Creativity, the Composers Forum, and the Composers Sinfonietta at Eastman. His BMI award-winning work was premiered by the Minnesota Orchestra and Osmo Vänskä as part of the 2008 Minnesota Orchestra Composer Institute.

Noah Meites was born in 1982 in Chicago, Illinois and currently resides in Santa Cruz, California. He received a performance certificate in jazz trumpet from the Centre des Musiques Didier Lockwood in Dammarie-les-Lys, France in 2006 and a B.A. with honors in English Literature and Africana Studies from Brown University in 2006. He is now a D.M.A. candidate at the University of California Santa Cruz (UCSC). He has studied composition with Paul Nauert, Hi Kyung Kim, and Gerald “Shep” Shapiro. At Brown University he received the Weston Prize for Instrumental Performance (trumpet) and at the UCSC he has received the Porter College Graduate Arts Research Grant, a Music Department Discretionary Funds Awards and a Regents’ Fellowship. Meites is active as a trumpet player and improviser and has studied with Gene Crissafulli, Jean Gobinet, Claude Egéa, Benoit Sourisse, and André Charlier and improvisation with Ed Tomassi. In France he founded an electro-jazz ensemble which performed in Poitiers and Paris, and in collaboration with Elvis Perkins Meites has performed on such stages as the David Letterman Show, Chicago’s Lollapolooza Festival and several venues in New York City. His music has been performed in several cities in California and his BMI award-winning work was premiered by the New Music Works ensemble under the direction of Phillip Collins at the UCSC’s 2009 April in Santa Cruz Contemporary Music Festival.

Rafael Nassif was born in Juiz de Flora, Brazil in 1984 and currently resides in Cataguases. He attended the Brazilian Conservatory of Music “Lorenzo Fernandez” in Cataguases from 1994 to 2001 and received a B.M. degree in music composition from the UFMG (Universidade Federal de Minas Gerais) in 2007. He is currently pursuing a M. M. degree in Sonology at the UFMG Music School in Bello Horizonte. Nassif’s composition teachers include Marlos Nobre, Oiliam Lanna, Sérgio Freire, Agnaldo Ribeio, and Fernando Burgos. He is the winner of many wards and prizes in Brazil including the Tinta Fresca 2008 in Bello Horizonte, the Concurso Revelação Jovens Compositores “Carlos Gomes” in 2005 in São Paulo, the 4th International Composition Competition for Contrabass in 2005, the Jovem Músico BDMG in 2004, the 2001 Tom Major Piano Competition in Muriaé. He has also won international competitions such as the Concorso Internazionale di Composizione Corale, Vittorio Veneto in Italy. In the 2007-8 concert season, he was the “Composer-in-Residence with the UFMG Chamber Choir and he has had performances by the Philharmonic Orchestra of Minas Gerais, the MUSICOOP Chamber Orchestra, the UFMG Male Choir, Ostravskà Banda in the Czech Republic and Coro Femminile “Eos” di Roma in Italy. His BMI award-winning work was premiered in 2008 by the UFMG Chamber Choir conducted by Lincoln de Andrade at the Eu Gostaria de Ouvir, a contemporary music festival in Belo Horizonte, Brazil.

Phil Taylor was born in Charlottesville, Virginia in 1989 and now resides in Salem, Oregon. He is an undergraduate music composition major at Willamette University where he has studied composition with John Peel and Julian Snow. He is the recipient of the Elmer and Grace Goudy Scholarship and the Glen C. Wade Scholarship at Willamette University. He has enjoyed many performances of his music at university composer’s workshops, including his composition Springtime which was performed by the fEARnoMUSIC String Quartet and his Sonata for flute and piano which was performed in a co-presentation with Beta Collide and featured flutist Molly Barth. Active as a pianist, he is currently a student of Jean-David Coen. His BMI award-winning work will be performed in an upcoming concert at Willamette University in a co-presentation with fEARnoMUSIC.

Roger Zare was born in Sarasota, Florida in 1985. He received a B.M. degree in composition in 2007 from the University of Southern California, and is now pursuing a M.M. degree in composition from Peabody Conservatory. Zare’s composition teachers include Christopher Theofanidis, David Smooke Derek Bermel, Donald Crockett, Tamar Diesendruck, Rick Lesemann and Morten Lauridsen. He was a winner of a 2007 BMI Student Composer Award, the 2008-9 Dallas Wind Symphony Brass Fanfares Competition and received the Underwood Emerging Composers Commission from the American Composers Orchestra in 2008. Zare was the 65th composer to be commissioned by the New York Youth Symphony as part of its First Music Program, and won the 2006 Sarasota Music Archive Morrison Memorial Composition Competition and the 2006 Phi Kappa Phi (USC Chapter) Student Recognition Award for his work, Fog. His music has been performed by the New York Youth Symphony in Carnegie Hall, the Sarasota Orchestra, the USC Thornton Symphony, the USC Concert Orchestra, FWCS Youth Philharmonic, USC Starving Composers’ Ensemble, Santa Monica Symphony Wind Quintet, the Sarasota Music Archive, and the Florida West Coast Symphony Orchestra.