Posted in MusicWorld on January 26, 2011 by Ellen Mallernee 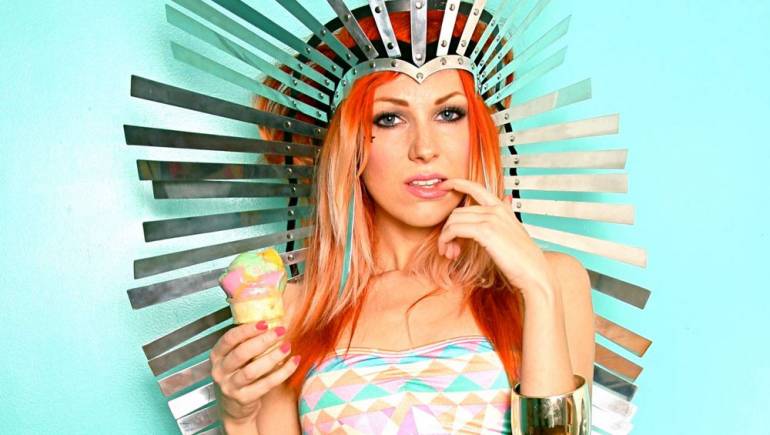 What lies beneath Katy Perry’s fuchsia-painted pout? Bonnie McKee’s lyrics. A first-call L.A. songwriter with candy apple-colored hair, McKee’s best-known for co-conspiring with Perry to write her infectious # 1 hits “California Gurls” and “Teenage Dream,” but she says, “As an artist, I’m darker and more dangerous than Katy is.”

That’s probably because while Perry was singing gospel in the sanctuary of her pastor parents, McKee was busy growing up too fast. At 14, she was dating a 30-year-old. By 16, she’d inked record deal and moved to Los Angeles to live in a fancy apartment all by herself. It seemed to happen in the nick of time; the dust-kicking young scenester had just been expelled from her Seattle high school.

At the time, McKee thought, “I’ve made it!” But she hadn’t really. Producers in L.A. and New York played hot potato with her songs. Three years went by as her record label fretted about McKee’s image and her target audience. In the meantime, she grew up, got fed up and found a way out of her deal. Even that she did imaginatively. She relishes the story of visiting the home of the label’s former CEO late one night. Once there, she used a bejeweled dagger to stab her demo CD into a tree just outside his front door. Then she scrawled “Platinum, Baby!” (“or something obnoxious like that”) in pink lipstick onto the windshield of his car. The next day she was dropped from the label, which is exactly what she was hoping for.

After meeting Perry in a vintage clothing store, the two helped align one another’s stars. Of Perry, McKee says, “We have so many creative parallels,” namely their mutual fascination by “the teenage condition.” Because McKee missed out on “prom and making out under the bleachers,” she believes that her life has become an homage to the kind of mundane adolescence she never got to experience. Only now, at age 25, is she really living the “Teenage Dream.”

“I learned not to be too precious,” says McKee of that failed first deal, although it did yield her lovely first album Trouble. “If something’s not working, cut your losses and move on. Just keep creating.”

Bonnie McKee will serve as a panelist on BMI’s annual Grammy-infused edition of “How I Wrote That Song” February 12 in Los Angeles. She will be joined by Cee Lo Green, Seal, Pitbull, Claude Kelly, and BC Jean.