Posted in MusicWorld on October 5, 2006 by Bruce Britt 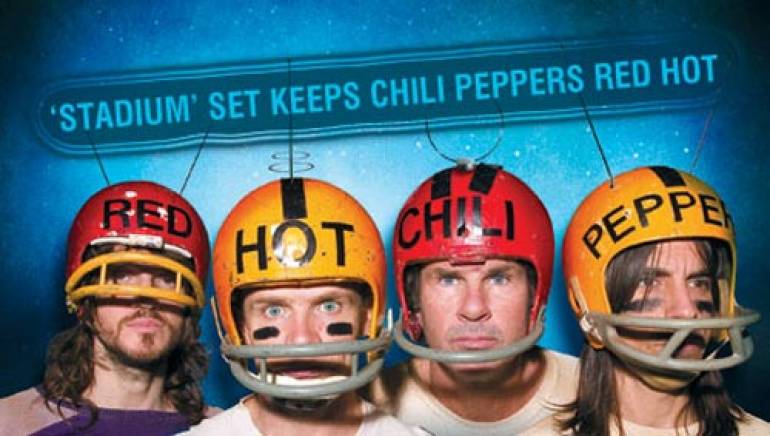 They pioneered funk-rock, wrote the alt-rock playbook, and led one of the most celebrated insurgencies in pop music history. So when the Red Hot Chili Peppers announced in early 2006 that their ninth studio recording would feature a whopping 28 tracks, some fans greeted the news with cautious anticipation. The suspense turned to befuddlement after the band disclosed that the new album would be divided into two discs titled “Jupiter” and “Mars.” Had rock’s favorite Cali-foursome succumbed to aristocratic self-importance? Or would the new disc take its place alongside adventuresome Chili Pepper masterpieces like Blood Sugar Sex Magik, Californication and By The Way?

Ecstatic critical reviews and enthusiastic fan response make it clear that the latter is the answer. Fueled by the success of the chart-topping single “Dani California,” the Chili Peppers’ long-awaited Stadium Arcadium entered the pop charts at No. 1, making it the highest-charting album of the band’s career. Produced by Rick Rubin (Beastie Boys, Dixie Chicks, Johnny Cash), and recorded at the same Los Angeles mansion-turned-studio where they conducted the Blood Sugar Sex Magik sessions, Stadium Arcadium finds vocalist Anthony Kiedis, bassist Flea, guitarist John Frusciante and drummer Chad Smith broadening their musical palette to include hints of classic rock, folk, and even spiritualized pop.

The double-disc set inspired a veritable storm of adoring reviews. In its four-star critique, Rolling Stone called the album, “the most ambitious work of (the band’s) twenty-three-year career…a late-career triumph that could pass for another, lesser group’s greatest-hits collection.” Blender described the effort as an “elegant… surprising double-disc set… this is virile and excited music.” The discerning and often restrained BBC called Stadium Arcadium a “multi-faceted must,” while declaring the Chili Peppers “card-carrying Rock Gods.”

The band itself might agree with such assertions. In the official Stadium Arcadium biography, guitarist Frusciante touts the life-affirming power of the Peppers’ potent new songs. “If you let go and let this music take you by the hand it will take you flying through skies of sound,” Frusciante writes. “It will zoom you up well above outer space and it will show you around planes of existence that do not share the laws and conditions of this reality.”

As befits a band from Los Angeles, the Chili Peppers’ story reads like a Tinseltown melodrama. Emerging in 1984, the foursome became world-renowned for their righteous reconciliation of bump-and-grind funk, raw-nerved post-punk and mischievous pop. But their climb to the top wasn’t easy. Following the 1988 demise of founding guitarist Hillel Slovak from a drug overdose, the band recruited Frusciante. But as Kiedis recounts in his 2004 autobiography, “Scar Tissue” (Hyperion Publishers), the band wrestled with lingering problems.

The problems came to a head in 1992, just as hit singles like “Give It Away,” “Under the Bridge” and “Breaking the Girl” were transforming the Chili Peppers from underground heroes to nuevo-rock sensations. With scant advance notice, Frusciante quit the band and Kiedis, Flea and Smith soldiered on with several replacement guitarists, including Jane’s Addiction guitarist Dave Navarro (featured on the Chili Peppers’ 1995 album, One Hot Minute). But Navarro’s tenure was short-lived, and the band welcomed Frusciante back to the fold in 1998.

The Peppers have been on a roll ever since, with Kiedis and Flea becoming as iconic in their L.A. hometown as the Hollywood sign. Either together or separately they have appeared in a host of movies, including Back to the Future II, The Big Lebowski, The Chase and Fear and Loathing in Las Vegas. Flea plays the voice of Donnie Thornberry on the Nickelodeon animated series, The Wild Thornberrys.

Yet despite their occasional film appearances, music remains the Chili Peppers’ main inspiration. Judging by their remarkable track record — the band has sold over 50 million recordings worldwide — fans wouldn’t have it any other way.