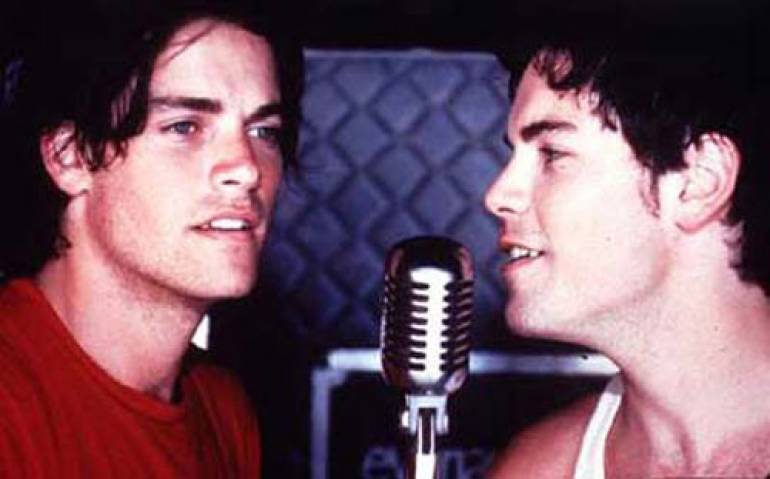 Armed with a fetching hit single called "Crazy for This Girl" and pinup boy good looks, identical twins Evan and Jaron appear to be prototypical teen heartthrobs in the Duncan Sheik mold.

But there's something distinctly unorthodox - or shall we say orthodox - about this Atlanta-bred, Los Angeles-based duo. Observant Jews, the pair refuses to perform on Friday nights and keeps kosher on the road, even when this means cooking their own meals when the proper cuisine can't be found.

"It's very difficult to coexist being Jewish and a rock musician," Evan once told a journalist from a Cleveland Jewish publication. "Our rabbi was concerned about us going on the road. With all the girls, would we stay strong? But we're making a really good run at it. Our existence is proof that you can be both."

There's nothing preachy about Evan and Jaron's manner or music. The Lowenstein twins' recent, self-titled breakthrough album on Columbia Records brims with hooky and full-bodied pop-rock. The duo's seamless vocal harmonies give their songs a sense of distinction, particularly on tracks like "Crazy for This Girl."

Evan and Jaron were discovered by Jimmy Buffett after they were hired to perform at the singer's Margaritaville Café in Key West, FL in the mid-'90s. Chris Blackwell subsequently signed the duo to Island Records. But Blackwell left the company just as Evan and Jaron completed their first Island album, the cleverly titled We've Never Heard of You Either The twins then got lost in the front office shuffle at the record company and were dropped from the label.

Knowing a good thing when they saw it, Columbia Records signed Evan and Jaron and paired them with producer T-Bone Burnett. Their self-titled album also includes guest performances by drummer Mick Fleetwood and John Medeski, keyboardist with Medeski, Martin & Wood. A number of songs were co-written by outside artists, including producer Glen Ballard and Semisonic frontman Dan Wilson.

Interestingly enough, Evan and Jaron tend to have an easier time writing songs with other people than they do with each other.

"It's weird; we just can't sit down and write together," says Evan of his partnership with Jaron. "It's like we know each other too well. It's nice to write a song with someone you don't know so well, sort of like how you can go to a bar and tell a stranger your whole life story."