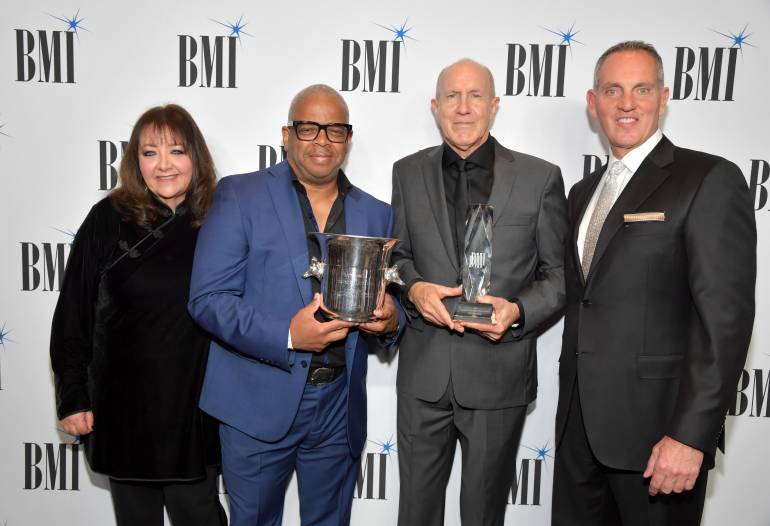 BMI proudly held its 35th annual Film, TV & Visual Media Awards last night to celebrate the top performing composers in film, TV and visual media of the past year. The highest honors of the evening went to film composer and multiple award-winning jazz musician, Terence Blanchard, who was named a BMI Icon in recognition of his significant contributions to the cinematic community, while William Ross received BMI’s Classic Contribution Award for his outstanding work as an arranger, orchestrator, conductor, music director, composer and mentor to emerging talent. The private ceremony was hosted by Vice President, Creative – Film, TV & Visual Media, Doreen Ringer-Ross and BMI President and CEO Mike O’Neill at the Beverly Wilshire Hotel in Beverly Hills, California.

O’Neill presented Blanchard with the BMI Icon accolade in front of a room of his peers, noting that the award was “reserved for extraordinary members of the BMI family, whose artistry has had an unparalleled impact on both music lovers and music creators.” He went on to say, “You’ve humbly said you stand on the shoulders of musical legends. Well, Terence, steady your shoulders, because there are many you will carry as they aspire to your legacy.”

After a tribute video that highlighted his successful career, Blanchard thanked BMI “for opening your arms to all of us who want to be a part of the creative process.” He went on to say, “We just want to express ourselves in an artistic way. We have a burning desire to say something that is in us and sometimes we don’t even know what it is that we are trying to say, but these projects give us room to do that.”

Earlier in the evening, William Ross was presented with the BMI Classic Contribution Award in recognition of his extensive work mentoring new talent throughout his career, which has spanned feature films, the recording industry and television. In receiving this award, Ross joins a prestigious list of previous recipients including Rick Baitz, Lucas Richman, Peter Golub, Mike Post, Chris Montan, David Newman and Terence Blanchard, who received this honor for his vital work as an educator and mentor to emerging composers in 2010.

Many other notable composers were saluted throughout the ceremony as well, for music featured in the past year’s top-grossing films, top-rated network television series and highest-ranking cable network and streamed media programs. Some of the night’s multiple award winners included Nathan Barr, Tyler Bates, Ludwig Göransson, Harry Gregson-Williams, Mark Mothersbaugh, Mac Quayle, Rob Simonsen, and Brian Tyler, among others. Atli Örvarsson received the most awards of the night with a total of four crystal statuettes for his work on the hit TV shows Chicago P.D., Chicago Med, Chicago Fire and FBI.

Over a career that has spanned three decades, BMI Icon Blanchard has scored more than 50 films, recorded more than 33 albums and toured the world.  He’s a five-time GRAMMY Award winner, a 2018 US Artists Fellow, and most recently, an Oscar nominee for his music in Spike Lee’s blockbuster BlacKkKlansman, which the New York Times called “a soaring, seething, luxuriant score.” As Lee’s longtime collaborator, Blanchard has scored 17 of his films, including Malcolm X; Jungle Fever; Clockers; Summer of Sam; Inside Man; 25th Hour (which garnered a Golden Globe nomination) and the documentary When the Levees Broke, about Blanchard’s hometown of New Orleans during the devastation from Hurricane Katrina. Outside of his work in film and television, Blanchard is also a celebrated bandleader and trumpeter with an unwavering dedication to jazz education, frequently holding master classes around the world.

THE HOUSE WITH A CLOCK IN ITS WALLS
Nathan Barr

THE LOOMING TOWER
Will Bates

THIS IS US
Siddhartha Khosla

INTO THE BADLANDS
Mike Shinoda