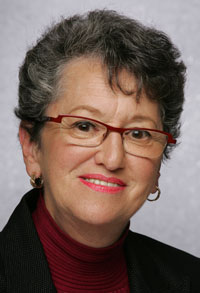 Judith M. Saffer, Esq., Assistant General Counsel at BMI, has been elected President of the American Intellectual Property Law Association(AIPLA). Saffer will be formally sworn in at a luncheon and black-tie gala on Oct. 20 at the Marriott Wardman Park Hotel in Washington, D.C., where the AIPLA is headquartered.

An expert in the field of intellectual property, Saffer lectures frequently on copyright law and is a regular speaker at training seminars sponsored by the U.S. Copyright Office and for the World Intellectual Property Organization (WIPO). She frequently serves as an advisor to governments and business leaders in countries like India, Nepal, Bangladesh, Benin and Tunisia, and was most recently in Beijing, China, leading a delegation of intellectual property attorneys who met with government officials and leading Chinese attorneys to discuss piracy issues.

As Assistant General Counsel for BMI, the U.S. performing right organization where she has worked for the past 20 years, Saffer is responsible for supervising staff attorneys in the legal department, coordinating outside counsel throughout the United States, and protecting the rights of BMI's more than 300,000 songwriters, composers and music publishers. Prior to joining BMI, she held various senior legal positions at ASCAP. Saffer received her Juris Doctorate from New York University's School of Law and graduated Phi Beta Kappa from NYU's Washington Square College.

Formed in 1897, the American Intellectual Property Law Association is a 16,000-member, national bar association constituted primarily of intellectual property lawyers in private and corporate practice, in government service, and in the academic community. AIPLA is actively involved in shaping U.S. intellectual property policy through its work on legislation, federal regulations and cases in the U.S. courts. Internationally, AIPLA has spearheaded a worldwide campaign to encourage countries to enforce patent, copyright and trademark laws, regularly participates in WIPO meetings, and maintains close relations with foreign IP officials.