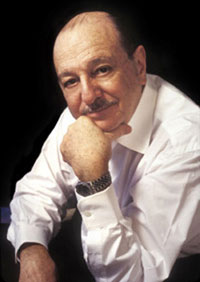 Internationally renowned producer/arranger and BMI songwriter Arif Mardin passed away June 25 from pancreatic cancer. He was 74.

In a career that lasted more than four decades, Mardin collected numerous awards, including 12 Grammys, and his many recordings earned him more than 40 gold and platinum albums. Honored by the National Academy of Recording Arts and Sciences (NARAS) with a Trustee Award for Lifetime Achievement in 2001, he played a vital role in the careers of such diverse artists as Aretha Franklin, the Bee Gees, Willie Nelson, Dusty Springfield and Norah Jones.

We are deeply saddened by the news of Arif's passing," said BMI President & CEO Del Bryant. "A member of the BMI family for more than 40 years, he made an indelible mark on our industry, crafting countless hits across virtually every musical genre. He will be remembered as one of the true giants in the history of recorded music."

Arif Mardin was born on March 15, 1932, in Istanbul, Turkey. Trained in economics but also a composer, arranger and orchestrator, Mardin's life changed in 1956 when he met Dizzy Gillespie and Quincy Jones at a Turkish concert. So impressed were they by his compositions, Jones recommended Mardin for a scholarship to the prestigious Berklee School of Music in Boston, Mass., where Mardin studied from 1958 to 1961.

Mardin joined Atlantic Records in 1963 as an assistant to Neshui Ertegun, who supervised the jazz division. When music legend and Atlantic label head Jerry Wexler heard some of Mardin's arrangements for King Curtis at a BMI Awards event, he recognized an untapped in-house talent. He quickly became, in Wexler's words, a "super pro" and "soulful Turkish eminence."

During his association with Atlantic, Mardin arranged and helped to produce such outstanding artists as the Young Rascals, Hall & Oates, Bette Midler, Robert Flack, John Prine, Donnie Hathaway and the Average White Band. He was made a Vice President of the label in 1969 and retired in 2001.

Later successes followed with albums by Chaka Khan, Rod Stewart, Barbara Streisand and Diana Ross, among many others. One of his last major achievements was the breakthrough release by Norah Jones in 2003.

Of his associate, Atlantic founder Ahmet Ertegun said, "In a business driven by trend and fashion, Arif has remained a true artist, a man of incredible musical talent."

Mardin is survived by his wife, Latife, a novelist and playwright; his son, Joe, a producer and arranger; and two daughters, Julie and Nazan Joffre.