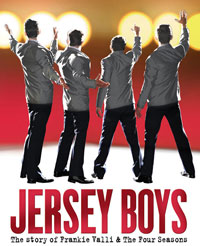 A true rock and roll biography, Jersey Boys features the original music of BMI Award-winning songwriters Bob Gaudio, a founder and full-time member of the Four Seasons who wrote the music, and Bob Crewe, who wrote the lyrics and produced many of the group's records. Gaudio, who is a member of both the Songwriters and Rock and Roll halls of fame, took the stage with the show's producers, which included fellow Newark native Joe Pesci.

Duplicating the harmonies of Valli, Gaudio, Nick Massi and Tommy DeVito, the show soars on the quartet's biggest hits, including "Sherry," "Big Girls Don't Cry," "Walk Like a Man" and "December, 1963 (Oh, What a Night)."