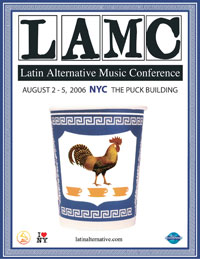 BMI writers can take advantage of a reduced registration fee of $99 for the upcoming Latin Alternative Music Conference (LAMC), being held August 2-5 at the Puck Building (295 Lafayette Street) in New York City.

Co-sponsored by BMI, LAMC is the only major conference geared toward the marketing of Spanish-language alternative music -- the voice of today's Latinos. This four-day event provides networking opportunities with the genre's leading artists, label executives, journalists, managers, retailers and programmers, and is the most extensive gathering of Latinos in entertainment to be offered by a music conference to date. LAMC 2005 saw more than 1100 industry leaders converge in Soho to participate in industry panels, exhibitions, press conferences and networking.

LAMC brings together Anglo and Latino heavyweights from all sectors of the entertainment industry, from the participation of major English and Spanish-language magazines such as Billboard, Alternative Press, Latina Magazine, La Banda Elastica and others, to the executives from leading U.S. and Latino labels, agencies, major corporations, television, print and new media companies. The conference ensures maximum exposure for Latin artists and repertoire in the U.S. marketplace. The attendance of international artists and label executives from Latin America and Europe makes LAMC a global event.

With the initiative of bringing Latin alternative music to a wider, more mainstream audience, LAMC features several industry panels with sought-after speakers from the entertainment and business world. LAMC also offers invaluable opportunities to reach 25,000+ Latino consumers in the New York market, as well as industry tastemakers and trendsetters through its various concerts and parties.

To receive the reduced BMI rate, please use code BMI99 when registering.