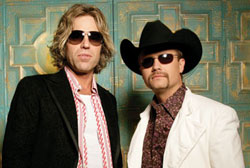 BMI country duo Big & Rich have been announced as the hosts of the upcoming GuitarTown Auction Gala being held on Thursday, February 23 at BMI's Music Row offices. The much anticipated event is the culmination of the popular GuitarTown project, a city-wide exhibit of 10-foot tall Gibson Guitar sculptures and other painted guitar art that has been on display throughout Nashville for the past year.

The GuitarTown Auction Gala is a chance to bid on the sculptures and showcase guitars that have gained worldwide recognition, including Dolly Parton's BMI-sponsored "Flutter" guitar and the Charlie Daniels Band's "Let Freedom Sing" guitar, among many others.

A limited number of tickets are available for sale to the public for $200 until February 17. Tickets include entrance to the VIP reception and auction, including food and libations, a VIP gift bag filled with sponsor gifts, hob-knobbing with the stars and a chance to walk the red carpet and be on a one-hour television program taping at the event. Bidders can also bid live online on eBay or via television broadcast. To register to bid or for more auction information, please visit Julien's Auctions. For more ticket information, please call 615.871.4500 ext. 2908.

Presented by Gibson Guitar, Nashville's GuitarTown is a public arts project that launched in April 2004, featuring 10-foot tall fiberglass Gibson guitars artistically designed by local and nationally acclaimed visual artists and placed throughout Nashville in front of the city's landmarks and businesses until January 2006. Many of the guitar sculptures are partnered with a country music celebrity and backed by a corporate sponsor. The GuitarTown Project has united the Nashville art, music and business communities behind the cause of raising money for the following four local charities: the Country Music Hall of Fame and Museum, the DISTRICT, the Cystic Fibrosis Foundation and the United Way of Nashville.