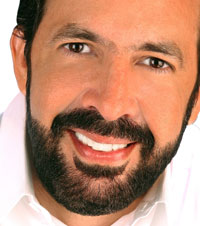 Multiple Grammy Award-winning merengue artist Juan Luis Guerra will be honored as a BMI Icon at the music copyright organization's 13th annual Latin Awards. The ceremony, which honors the songwriters and publishers of the most played BMI Latin songs on U.S. radio and television from the past year, will be held April 7 at the Metropolitan Pavilion in New York, the first time the awards will be held in that city.

The Icon designation is given to a legendary BMI songwriter who has had a "unique and indelible influence on generations of music makers." Guerra joins a distinguished list that includes last year's Icon honoree Carlos Santana, as well as James Brown, Wilson, Isaac Hayes, Steve Winwood, Paul Simon and Dolly Parton, among others.

A native of the Dominican Republic, Juan Luis Guerra is largely responsible for the rebirth of merengue and the popularization of bachata music around the world. His diverse repertoire includes such Latin chart-toppers as "Ojalá que Llueva Café," "Bachata Rosa," "El Niagara en Bicicleta," "Viviré" and "Mi PC," as well as his most recent #1 hit "Para Tí" and the 2005 Latin Grammy winning song "Las Avispas."

Guerra, who blends traditional tropical music, merengue rhythms and powerful lyrics into his own unique sound, has enjoyed great success as both a recording artist and a songwriter for more than 20 years. His songs have been recorded by such renowned international Latin stars as Luis Miguel, Emmanuel and others.

With a list of accolades that includes six Grammys and 12 BMI Latin Awards, Guerra received the "Spirit of Hope" honor at Billboard's 2005 Latin Music Awards in recognition of his philanthropic organization, Fundacion 440, a charitable foundation that provides medical assistance to children and adults in the Dominican Republic.

In addition to the Icon tribute, a Latin Song of the Year, Songwriter of the Year and Publisher of the Year will be announced during the evening. Previous honorees include Shakira, Estéfano, Gloria & Emilio Estefan, Juanes, Luis Miguel, Ramon Ayala, Intocable, Los Tucanes de Tijuana, Los Tigres del Norte, Banda el Recodo and Lupillo Rivera.