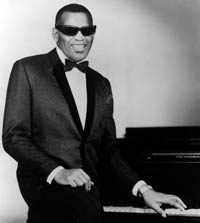 The Smithsonian's National Museum of American History received a braille keyboard, sunglasses, chess set, costumes and other memorabilia reflecting the storied career of BMI legendary artist Ray Charles in a special ceremony held September 21 in Washington, DC. A selection from the donation, which also includes items from his long-time friend and business manager Joe Adams, will go on view at the museum on October 28.

Among the items from Charles' estate are a Yamaha KX 88 keyboard marked in braille that he used during concert tours in the 1980s and 1990s, three costumes worn onstage, braille editions of popular magazines, a chess set for the blind, a traveling bathroom kit and a pair of his signature Ray-Ban sunglasses. Adams will donate photographs from his own career, including scripts, casting materials and news clips from the motion picture The Manchurian Candidate and the Broadway show Jamaica; two costumes he wore onstage when introducing Charles; and various other ephemera from Charles and Adams collaborations.

One of America's best-loved musicians, Charles was born September 23, 1930 in Georgia, a state he later immortalized with his signature song "Georgia On My Mind." Left completely blind from glaucoma by the age of seven, Charles studied at a special school for the deaf and blind and decided to become a musician. After his groundbreaking recording for Atlantic Records, "I Got A Woman," Charles found a wide audience for his unique sound that fused gospel with r&b.

In 1960 he switched labels and became one of the first artists to negotiate the right to own his own masters. During this period, Charles recorded some of his biggest hits, including "Georgia," "Unchain My Heart" and "Hit the Road, Jack." In 1962, he and Adams formed their own label, RPM International, where he continued to produce hits in the r&b, soul, blues, jazz, country, rock and pop genres.

During a career that spanned more than five decades, Charles won 17 Grammy Awards, was inducted into the Rock and Roll Hall of Fame, was awarded a star on the Hollywood Walk of Fame, and received the National Medal of Arts, among many other honors. The donation fell two days before what would have been Charles' 75th birthday; he died in June of 2004.

The National Museum of American History has a long tradition of collections, exhibitions and public programs dedicated to telling the story of America's music. The museum is home to 100,000 pages of Duke Ellington's unpublished music; costumes belonging to Ella Fitzgerald, Celia Cruz, Carol Channing and Bobby Short; and instruments used by Dizzy Gillespie, Lionel Hampton, Tito Puente and Herbie Hancock. In 2002, the museum initiated Jazz Appreciation Month, an annual national and international celebration of jazz every April. Visitors to the museum since May 2005 have enjoyed the exhibition, "�Az?car! The Life and Music of Celia Cruz," which celebrates the Queen of Salsa, and opening in 2006 will be "Honky Tonk: Country Music Photos by Henry Hornstein," a photography exhibition that looks at the early years of country music and some of its most legendary artists.