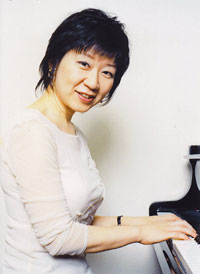 Jazz pianist Junko Moriya has been named the winner of the 12th Annual BMI/Thelonious Monk Jazz Composers Competition for her work, "Playground." The $10,000 prize was presented by BMI President & CEO Del Bryant during the Thelonious Monk Institute's annual International Jazz Competition held at the Kennedy Center on September 19.

Introduced in 1993 by the performing rights organization as an extension of the Monk Institute's annual competition, the BMI Jazz Composers Award is given each year to a young, aspiring composer who best demonstrates originality, creativity and excellence in jazz composition. Junko is the first woman to receive this prestigious award. This year's judges included jazz greats Ron Carter, Kenny Werner and Freddie Bryant.

Junko began studying classical piano when she was five years old. By age 18, she was studying jazz piano and performing in the Waseda University High Society Orchestra, one of the most famous student big bands in Tokyo. After receiving her Bachelor's degree from Waseda University, she moved to New York where she studied with Harold Danko and received a Master's degree from the Manhattan School of Music. During that time, she performed at numerous jazz clubs around the city and in Europe as well.

Since returning to Japan in 1993, Junko has been performing at jazz clubs, concert halls and jazz festivals throughout the country, gaining recognition not only as a pianist, but also as a composer and arranger. Her big band, the Junko Moriya Orchestra, regularly performs her original music, which a number of Japanese student big bands have selected to include in their own repertoires.

In addition to teaching jazz piano and theory at Shoubi Music University and the Yamano Music School, Junko directs big bands at various junior high and high schools, and appears on radio and television programs all across Japan.

The Monk Institute was founded in 1986 by former opera singer Maria Fisher with the help of Thelonious Monk Jr., the son of one of jazz music's greatest contributors, and Executive Director Tom Carter. The annual Thelonious Monk International Jazz Competition gives jazz artists and composers the opportunity to launch successful careers, as well as to win valuable scholarship awards to continue their musical education.