Posted in News on January 26, 2005
Karaoke was born 20 years ago, according to legend, when a few stressed-out Japanese businessmen were looking for fun in a Kobe City snack bar. When a strolling guitarist didn't report for work due to illness, the owner of the bar produced some tapes of instrumental recordings. Many Japanese love to sing, and these businessmen were delighted to croon along with the tapes. 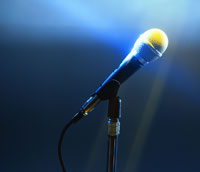 Singing over the melodies of popular tunes - or karaoke - has grown into a $10 billion dollar worldwide industry in just two decades. While karaoke is most popular in Asia, karaoke-related sales in the United States were estimated at $300 million last year.

With the birth of karaoke, owners of bars, restaurants and nightclubs discovered an inexpensive way to entertain their customers. Karaoke provides an alternative to live musicians, and many customers enjoy shedding their inhibitions to participate in the entertainment. Karaoke equipment has become more sophisticated in recent years. Many businesses hire a karaoke jockey or KJ to run the show, but it can be cheaper than a band. Karaoke works best with well-known songs - those with melodies and lyrics easy to remember or read.

"One business expense occasionally overlooked by owners of karaoke bars and clubs is their responsibility to compensate songwriters," said Tom Annastas, BMI Vice President, General Licensing. "Virtually all popular songs are copyrighted and can't be legally played in public without permission of the songwriter. BMI can provide businesses an annual license authorizing the performance of songs from 300,000 songwriters and publishers. Without such permission," Annastas cautioned, "a business owner featuring karaoke likely is infringing on copyrights and may expose the establishment to litigation."

Those organizations that represent songwriters around the world (there are three companies in the U.S.) provide license agreements to business owners where karaoke is presented. Only the businesses where music is played are licensed by BMI. There is no BMI license required for KJs. Such agreements come in the form of annual blanket licenses, granting permission for all songs represented by that organization to be performed. BMI offers licenses covering about half the music performed in the United States, a repertoire of approximately 4.5 million works from around the world.

Most songwriters enjoy having their songs sung by others in public, whether by professional or amateur vocalists. Many songwriters earn most of their income as compensation for public performances rather than through music sales, relying on BMI to defend their livelihood. "Hearing my song during karaoke night is a kick," said Keith Stegall. "I'm really flattered when I find one of my songs on a karaoke list." Stegall has 380 songs registered with BMI, including eight that have been performed in public more than one million times each. Stegall's hits include "Don't Rock the Jukebox" and "Dallas" recorded by Alan Jackson, "Sexy Eyes" recorded by Dr. Hook, and "We're in this Love Together," recorded by Al Jarreau.