Posted in MusicWorld on March 3, 2004 by Roy Trakin 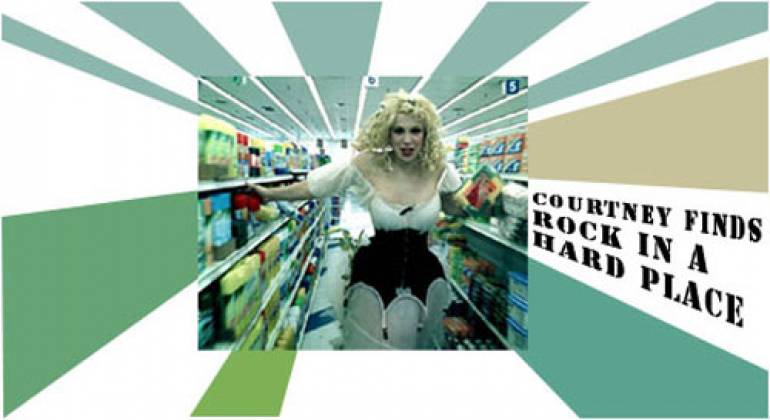 "They say that rock is dead," sings Courtney Love on "Mono," the first single from her solo bow, the sardonically titled America's Sweetheart (Virgin). "And it's probably true."

Still, that doesn't stop this punk diva from refusing to go gently, alternatively swaggering and caterwauling, evincing false bravado and real vulnerability, in a powerful blast of estrogen-laced rock sturm und angst that is her anti-valentine to the music biz from the self-proclaimed girl with the most cake.

It's hard to ignore the tabloid headlines, especially when Courtney cops to bad behavior in chemically fueled songs like "All the Drugs" and "I'll Do Anything" ("Give me one match so I can set myself on fire"). But she also shows a more human side.

Collaborating with Linda Perry and Bernie Taupin, Love's songwriting combines metallic crunch with chunky pop melodies. There are several mid-tempo power ballads, including the tender "Hold on to Me" the epic anti-Hollywood rant "Sunset Strip" and the closing "Never Gonna Be the Same," Courtney's widescreen version of "All the Young Hey Judes," which explains the liner-note dedication to Paul McCartney.

"Rock star/Pop star/Everybody dies/And all tomorrow's parties/They have happened tonight/And I know that I won't see tomorrow," she wails in "Sunset Strip," over a tuneful, sing-along chorus.

Courtney Love has paid the price, selling her soul for rock & roll, while referencing that Faustian bargain in "Zepplin Song": "Oh, go tell it to Jimmy Page/At the Crossroads with the deal he made. . . . " She's not sure whether the pact was worth it or not, either, admitting, "With all of my money/It doesn't feel as good/As the drugs."

Love for surrounds herself with some impressive talent on this new album. The cast includes MC5 guitarist Wayne Kramer and the Pixies/Breeders' Kim Deal, along with Virgin Records Chairman/CEO Matt Serletic, as well as Josh Abraham and James Barber, as producers.

"But there's no truth at the heart of any of it," she concludes in "Hold on to Me," "Just the brilliance and the passion/And the bitterness remain."

Courtney Love has been there and back…and lived to tell about it with brilliance, passion and bitterness. And if that's not rock & roll enough for you, tough.