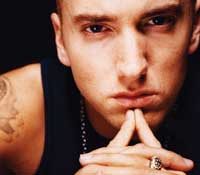 "Lose Yourself," written by BMI affiliates Eminem and Jeff Bass, won the Oscar for Best Original Song at the 75th Academy Awards ceremony in Hollywood. The song was featured in the film 8 Mile, which starred Eminem in his movie debut.