Posted in MusicWorld on September 30, 2002 by David Kronke 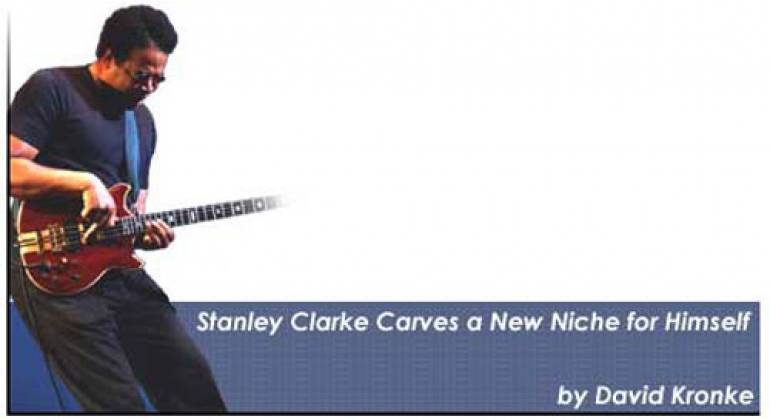 By the time Stanley Clarke took on composing for film and television in 1985, he had already redefined jazz bass musicianship, both in the group Return to Forever and on his own solo albums, and had created a very nice career for himself in which he could pursue his own artistic vision. Given that, why would he want to get embroiled in the highly collaborative world of film composing?

"Doing film composing is a very, very, very, very - you know, I can't say the word 'very' enough - humbling experience," Clarke says wryly. "As a jazz musician, people at the labels say less to you than they would rock & roll or pop guys. As jazz musicians, everyone was pretty afraid of us because they thought we were all crazy dudes, which some of us were.

"But I really latched onto film composing because there are a lot of different types of music, and in film composing, there's the opportunity for a little more creativity. There are more opportunities to do music you wouldn't put on one of your own albums. I was versed in orchestral music. I like standing in front of an orchestra and rehearsing something I've written and hearing my music played back. That's a real rush, right up there with sex for me."

Clarke has enjoyed a busy year, with scores for the blaxploitation comedy Undercover Brother, the prison boxing drama Undisputed and the action thriller The Transporter. He remains proudest of his work on John Singleton's urban trilogy, Boyz N The Hood, Poetic Justice and Higher Learning, because they helped introduce hip-hop to mainstream movie scores. "It was cool to be part of bringing that to the fore," Clarke says, though he allows, "everyone seems to be doing it today - you can overdo anything. A lot of urban films have the same artists on every soundtrack album."

Curiously enough, Clarke's first composing gig was for the anarchic children's show Pee-Wee's Playhouse. Calling the gig an "accident" (he happened to meet the show's musical director on a far different assignment, a Barry Manilow TV special), Clarke earned an Emmy nomination for his first score. "Right after that, all the agents said, 'Let's make some more money off this guy! We like him now'!" he remembers with a laugh.

Clarke would most like to score a romantic comedy. "I haven't done that enough. I'm good at it, and would like to get to show it," he says. "That's really where I'm at: I like writing light, romantic melodies, layered orchestral stuff."

In the meantime, he's fine-tuning his first solo album in a decade, due in stores next March. George Duke, Stewart Copeland, Bruce Hornsby and Joe Satriani are among the guest musicians. "The nice thing about this one is, it's a couple of records in one," Clarke boasts "It's like the regular Stanley Clarke albums of old, with some serious bass playing, but it also has some really appealing songs for other listeners."