Posted in MusicWorld on January 9, 2002 by Martin Huxley 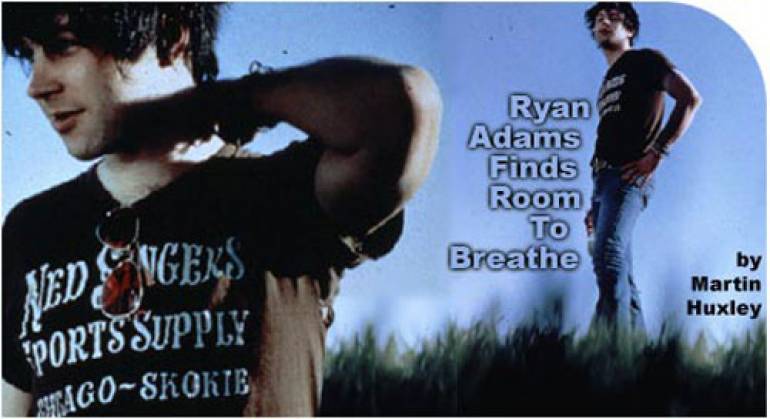 "There's something really sexy about sad," Ryan Adams recently told Elle, and he ought to know. The much-touted 26-year-old troubadour has won reams of acclaim lately by plumbing the depths of hurt, heartbreak and healing to make resonant music that seems likely to win him the commercial breakthrough that was long predicted for his former band, the North Carolina roots-rock combo Whiskeytown.

Gold's 16 songs chronicle the recent changes in Adams's personal life, beginning with him bidding farewell to the Big Apple (and a broken relationship) on the opening track, "New York, New York," and ending up in the artist's current home base of Los Angeles, whose landmarks are invested with emotional significance on "La Cienega Just Smiled" and "Goodnight, Hollywood Blvd." It was in L.A. that Adams recorded Gold with the help of producer Ethan Johns (son of legendary studio vet Glyn Johns), who also plays drums and guitar on the album.

Despite its personal lyrics, Gold - unlike the pensive Heartbreaker - is largely a rocking affair, with tunes like "Firecracker" and "New York, New York" boasting an organic classic-rock sound that's more celebratory than solemn. "I just think it happened that way," Adams says of Gold's upbeat vibe, adding, "It wasn't a bad idea, considering I already made a really bummer record.

"I do think the process of forgiving myself is really evident on this one," Adams says. "The songs aren't really self-loathing or self-destructive. This record is more about making amends with things and really facing them. And it's more upbeat because I think I'm giving myself some air to breathe."

He also says that switching locales has affected his songwriting for the better. "In New York, I think I wrote more from a claustrophobic kind of sense," Adams recently stated to Billboard. "You're in this small-ass apartment, the subway is hot, it's busy. So you internalize. But when I came to California, I think I looked harder for structure, because there's so much room here, so much space.

"I do have two new rules," concludes Adams, who already has three albums' worth of newly-recorded material in the can. "One is not to analyze what I write. The second is not to read my own press. I just want to make it and not fuss about it. No excuses for it. Just make it and there it is. That way, the process is more pure. And even if people hate it, well, it doesn't matter. Because I'm just doing it to do it."