Posted in MusicWorld on December 31, 2000 by Bruce Britt 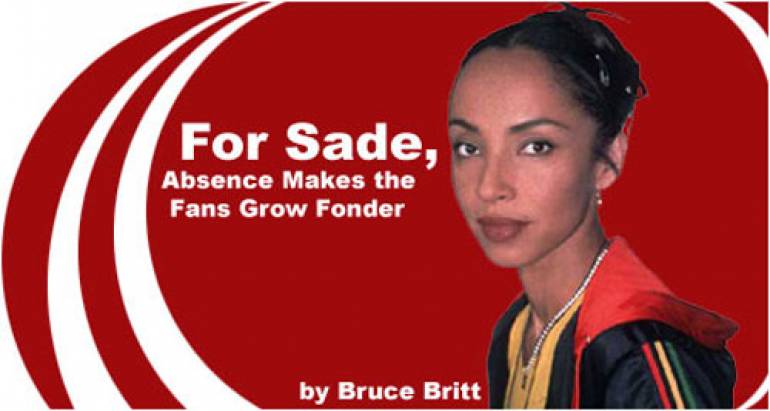 Not since Greta Garbo has an entertainer radiated as much alluring coolness as Sade.

Born in Nigeria and raised in London, Sade emerged on the global pop scene with a prolific bang. Her debut album, Diamond Life, and her sophomore recording, Promise, were released in 1985 to universal critical acclaim. But as her popularity grew, the singer slowly retreated from the spotlight. Sade took three years to record her third album, Stronger Than Pride, and four years to create her masterful 1992 opus, Love Deluxe. The singer only recently resurfaced with her first collection of new material in eight years - an eternity in pop music terms. Yet despite the long hiatus, Sade's fans have remained loyal. Her new album, Lover's Rock, immediately shot to the upper echelons of the charts and was cited as one of the best recordings of 2000.

Lover's Rock seems destined to take its place alongside Sade's five other albums, which collectively have sold over 50 million units worldwide (each of Sade's albums, including her 1997 "greatest hits" compilation, have sold no less than 3.5 million copies in the U.S. alone). With her stylish combination of confidence and mystery, Sade confirms that absence makes the heart grow fonder.

Most pop vocalists dare not risk alienating fans with lengthy hiatuses, but Sade obviously isn't a profiteering careerist. As Lover's Rock attests, she creates timeless music that blends the jazzy luxuriance of Ella Fitzgerald with the soulful postmodernism of Anita Baker. Moreover, Sade displays an endearing penchant for taking creative risks. Her latest single, "By Your Side," is a folk-influenced ballad that breaks with the singer's jazz-pop sound.

Sade's lasting appeal could be attributed to several factors. From the outset of her career, she has exuded a champagne-and-caviar image that transcends trends. She has always downplayed her simmering sexuality and supermodel looks, opting instead for an upscale image that emphasizes substance over style. She has established herself as an unassailable singer, composer and song stylist and has earned the sort of credibility many pop artists would kill for.

Just as The Beatles owed much of their success to producer George Martin, Sade is similarly beholden to a trio of indispensable collaborators who have supported her from the beginning. Saxophonist and guitarist Stuart Matthewman, keyboardist Andrew Hale and bassist Paul Spencer Denman have ably accompanied Sade in the studio and on stage, and have also co-composed some of the singer's most memorable songs, including "Your Love Is King," "No Ordinary Love" and "Never As Good As the First Time."

Born Helen Folasade Adu in Ibadan, Nigeria and raised in Essex, England, Sade grew up listening to soul artists like Curtis Mayfield, Donny Hathaway and Marvin Gaye. She assimilated her heroes' abilities to convey the complex sensibilities of heartache, hope and romance. Yet despite her obvious singing gifts, Sade didn't consider making music a career. She studied fashion at St. Martin's art college, only agreeing to sing when a couple of old school friends started a band "until they found a proper vocalist."

From there to singing with early '80s Latin funk collective Pride, she discovered a rare delight in songwriting. It was while she was with that group that Sade assumed the spotlight and formed her own group with fellow Pride members Matthewman, Hale and Denman. Currently hailed as a jazz-pop innovator, fans can only pray Sade won't wait too long before unveiling her next masterpiece.