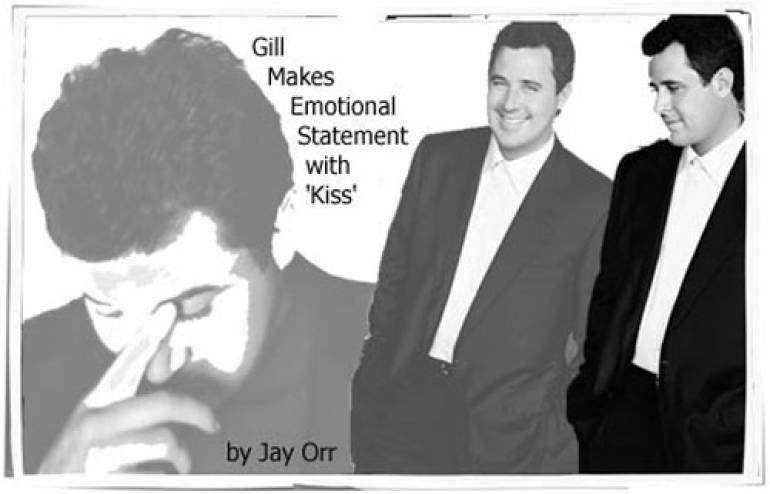 Country music has no more passionate singer and songwriter than Vince Gill. From "I Still Believe in You" to "Go Rest High on That Mountain" and "The Key to Life," Gill has found inspiration in his emotions and in his heart. The songs on his latest effort, Let's Make Sure We Kiss Goodbye, are no exception.


Even for Gill, Let's Make Sure We Kiss Goodbye makes a boldly emotional statement. "There's probably an element of, 'Gosh, this may be a little too revealing'," he concedes. But he also feels that his songs carry an added burden, since they prompt speculation about his personal life.


"If I was just a songwriter who wrote songs, if you didn't know me and I just went down to Music Row and wrote songs every day and nobody knew what my personal life was like, they wouldn't assume that the songs are all so autobiographical," he contends.

So, with Let's Make Sure We Kiss Goodbye, Gill delivered a project that tested the waters in a different way. "It offends me that some people will exploit the true elements of country by putting a gargantuan rock groove on a record, then adding a little fiddle signature lick, and a this and a that," he says. "That's nice, but don't tell me it's country just because it's got a little bit of that on there."

Gill ends his collection of passionate songs with a spare arrangement of a tune composed after the death of his friend, golfer Payne Stewart, in a plane crash. Ironically, Gill had just finished writing "Let's Make Sure We Kiss Goodbye" when he got a phone call telling him Stewart might be dead. The next day, Gill began posing questions about life's tragedies, not out of anger, but in the spirit of a search for understanding.

"Hey God" came out of that introspection. "I was in writing mode for a record and was writing all the time, every day," Gill recalls. When a mutual friend asked Gill for counsel during a phone conversation from the Stewart home, Gill shared some lyrics he had written. A family obligation prevented him from attending the funeral service in Florida, but he recorded the song and transmitted it via digital phone lines in time to be played for Stewart's memorial.

"My emotions are on my sleeve, musically - or if I get mad on the golf course, you're gonna know it," Gill says with a chuckle. "At least it's honest. That's all I ever wanted to be, was honest with music. I want to do things that speak to me, whether I'm happy or sad or angry or whatever. Those emotions are apparent in me."