Posted in News on December 21, 1999
BMI recently hosted a dinner and screening in honor of composer Christopher Young's original score for "The Hurricane." "The Hurricane" is based on the story of Rubin "Hurricane" Carter and stars Denzil Washington. "The Hurricane" was directed by Norman Jewison and is being released by Universal Pictures. Shown at the dinner are (left to right): Rich Jacobellis and Lyn Benjamin, agents, Kraft/Benjamin/Engel; composer Christopher Young; BMI's Doreen Ringer Ross; director/executive producer Norman Jewison; and the film's producer Michael Jewison. 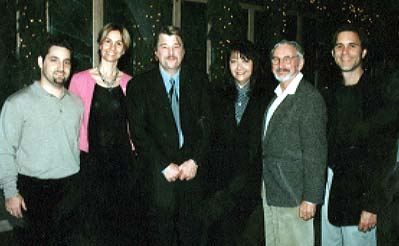